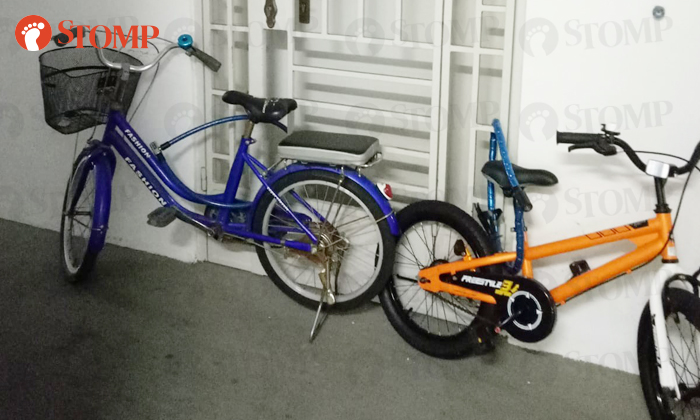 Sembawang Town Council will be removing the bicycles parked outside a vacant unit at Block 693D Woodlands Avenue 6 if they are left unclaimed after three days.

A Stomper noticed two bicycles that were parked outside a vacant unit and told Stomp about it on Sunday (Oct 4).

He also sent a photo of the bicycles that he took in August 2019.

"These bicycles have been parked outside this vacant unit since 2017," the Stomper said.

"This resident parked not one but two bicycles here, and they are obstructing the pathway of other residents.

"There is so much space along the corridor to park the bicycles, so why must they park outside this vacant unit?"

In response to a Stomp query, a spokesman for Sembawang Town Council said: "Our investigation shows the corridor maintaining a minimum of 1.2m gap despite the bicycles being parked there.

"Nonetheless, we have served notice to the bicycle owner to relocate the bicycles in three days.

"Our contractors will remove the bicycles if they are left unclaimed."