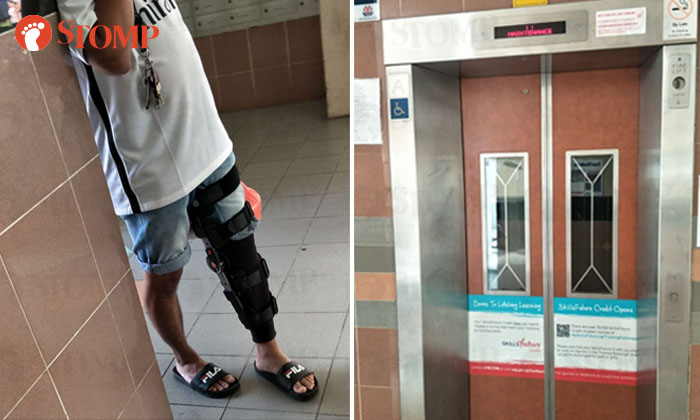 The unavailability of a lift at Block 721 Woodlands Circle on Aug 25 left Stomper Remy frustrated.

At 12pm to 2pm, the lift in question was closed due to maintenance works, after a resident had called in earlier regarding the poor lighting inside the lift car.

It was the only lift in operation at the time as the other lift was undergoing upgrading.

In response to a media query from Stomp, Sembawang Town Council said:

"It was a feedback regarding poor lighting in the lift car at Block 721.

"Our lift technician reached the site at 10.45am.

"The lift was in working condition at that time except for some of the lights.

"After preliminary investigations, the lift technician then turned off the lift at 12 noon to carry out a thorough check.

"He managed to trace the cause of the defective lights to the faulty travelling cables, but complete rectification work could not be carried out due to extended shutdown time required.

"In consideration of the weekend traffic, the lift was turned on for residents' use at 2pm.

"The rectification work to replace the faulty travelling cable was therefore postponed to Monday morning, 10am to 11.30am to minimise inconvenience to our residents.

"Throughout the weekends on Aug 25 and 26, the lift was fully functional with the exception of the two hours from 12 noon to 2pm on Aug 25 (Saturday).

"In case of emergency, residents should call EMSU's 24-hour hotline.

"The number can be found at the lift lobby."

Sembawang Town Council also added that a notice was put up in the period that it was shut down from 12noon to 2pm.

Stomper Remy, a resident, said that the incident came as an inconvenience to himself and others.

He first noticed the stalled lift at around 12.30pm, and called the EMSU hotline at 12.45pm.

He also noticed a man with a leg brace waiting at the ground floor at about 1.20pm.

In a phone interview with Stomp, Remy said:

"I've been waiting for 1 hour but no technicians have arrived.

"When I called them, they told me that they would notify the technicians.

"I told them to expedite.

"My concern here is for those who really need help, like the elderly or those in emergency situations."

Related Stories
Lift door at Yishun block dislodged by PMD, residents advised to use lift safely
5 people trapped in lift at Far East Plaza for nearly an hour: "I felt really helpless"
Karma is when naughty kid pees on control panel and gets stuck in lift
More About:
lift
singapore
breakdown