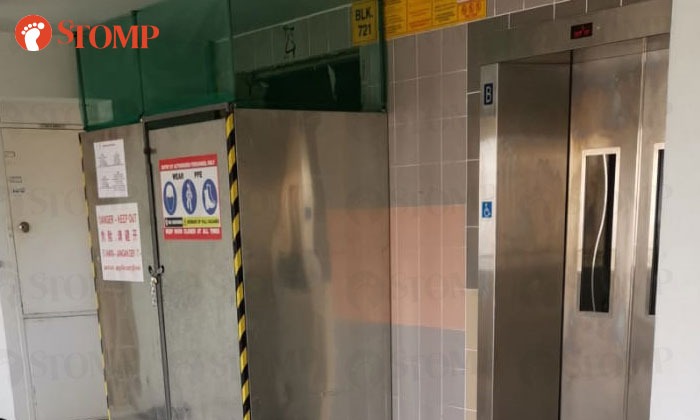 Residents at Block 721 Woodlands Circle have been plagued with lift problems since August 2018.

In the most recent incident, Stomper Remy alerted Stomp to the breakdown of Lift B while Lift A was shut down on Thursday morning (Mar 21).

This comes after Lift B was upgraded in January as part of a $33 million lift replacement programme by the Sembawang Town Council.

"It's so annoying that our residential lift has broken down despite being changed to a new one," the Stomper said.

"My concern is for the elderly and people who need the lift badly."

In response to a Stomp media query, a town council spokesman said it had received a report regarding the lift breakdown at 9.38am.

"The fault was traced to a computer error, and the lift was restored to its normal function at 10.05am," the spokesman said.

"As a further preemptive measure, another thorough check was carried out last night to ensure that the lift is in working condition.

"We wish to reassure our residents that it is our policy to give top priority to lift breakdowns to all blocks under our ongoing Lift Replacement Programme.

"We regret for the inconvenience and anxiety caused to our residents."

Previously, Lift A broke down twice on Dec 26 last year due to door-related problems.

Last August, one of the lifts was out of order for two hours.