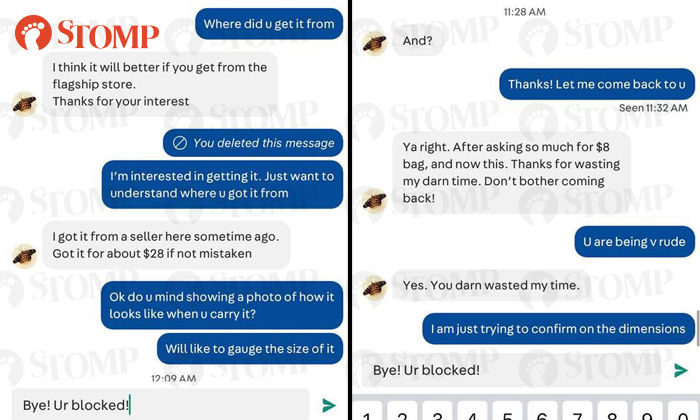 E-commerce is meant to make our lives easier, but a woman's latest online shopping experience turned out to be an unpleasant one.

Stomper Ivy came across a shoulder bag that was being sold on online marketplace Carousell. The bag, which appears to have Puma's brand and logo, was priced at $8.

Interested in buying the bag, Ivy messaged the seller.

The seller initially seemed put off by Ivy's queries and suggested she buy the bag from Puma's flagship store instead.

However, Ivy explained that she just wanted to understand where the bag was from.

The seller said she did not know if the bag was authentic, as she had purchased it from another Carousell user for "about $28" but did not use it.

Ivy also asked for more photos of the bag to see how it looks like when carried and to gauge its size, which the seller complied with.

Ivy then told the seller that she would come back to her, but was shocked by the response she got.

The seller had chided: "After asking so much for a $8 bag, and now this. Thanks for wasting my darn time. Don't bother coming back!"

Ivy told Stomp: "I proceeded to report and block the person. I felt that she’s very rude and her reaction was uncalled for.

"I merely asked her two questions - 1) whether the item is genuine and 2) whether there are photos of the bag being worn to gauge its dimensions.

"Thereafter, I thanked her and told her that I will get back to her again.

"But she lashed out at me and accused me of asking her 'so much for a $8 bag' and 'wasting her darn time'.

"As if we don’t have the right to ask for more info before committing to a purchase."

Related Stories
Carousell buyer uses vulgarity while dealing with seller, asks why she can't be more 'flexible'
Carousell user trolls buyer who offered $58 for Fred Perry wallet: 'Lowballers deserve to be played'
Carousell user curses woman and tells her to go Geylang after she says 'all no no no' to him
More About:
Carousell
rude
bad service
text
online shopping