Seller refuses to give $6,800 refund for fake Chanel bag as she has 'spent all the money' 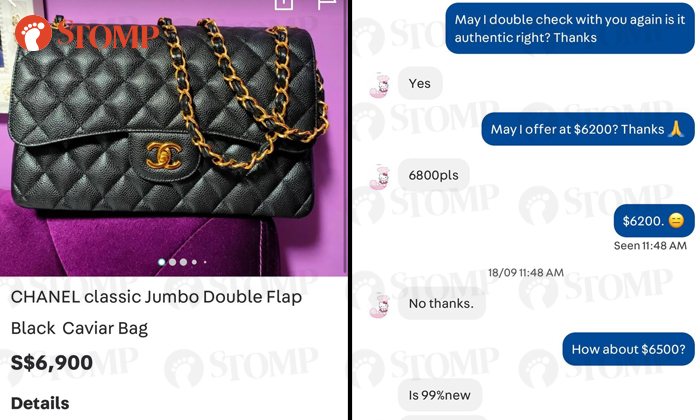 A woman purchased a Chanel bag for $6,800 from an online seller — only to realise that the item is likely counterfeit.

Stomper Jesshang said she came across a Carousell listing for the luxury handbag on September 18. The Chanel Jumbo Classic Double Flap Bag was priced at $6,900 by a user known as Jenny.

Preloved bags of the same model cost $8,400 and $12,895 on fashion retailers Style Theory and Farfetch respectively.

According to screenshots shared by Jesshang, the seller said that the bag was authentic and "99% new". She also refused to go lower than $6,800 and the deal was eventually confirmed.

The Stomper said: "On the same day at about 10pm, I met up with Jenny at Anchorvale Street to view the bag and made payment by cash.

"Jenny also provided me with invoices dated May 21, 2019, for the bag that she had purchased in Paris previously.

"On November 25, I brought the bag to Luxury Corner with intention to sell the bag. I was informed by the store staff that the bag was fake."

Jesshang then contacted Jenny, who insisted that the bag was authentic.

"I told Jenny to come and verify the bag at Luxury Corner, but she refused to meet up," the Stomper added. 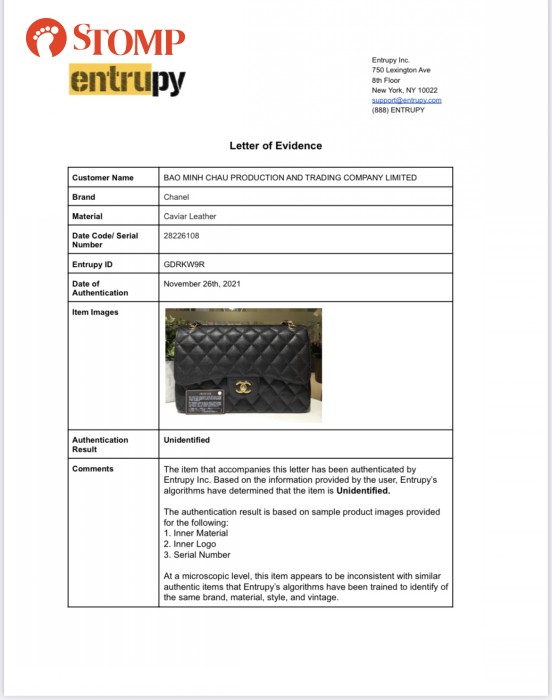 Jesshang also had the bag verified by Entrupy, an authentication service for luxury and designer goods. According to its website, Entrupy has an accuracy rating of 99.1%.

A letter of evidence from Entrupy noted that the bag Jesshang bought is inconsistent with similar authentic items and classified the authentication result as "unidentified".

Jesshang, who lodged a police report on November 27, told Stomp: "I asked Jenny for a refund, but she mentioned that she had already spent all the money and asked me to sell the bag to another person."