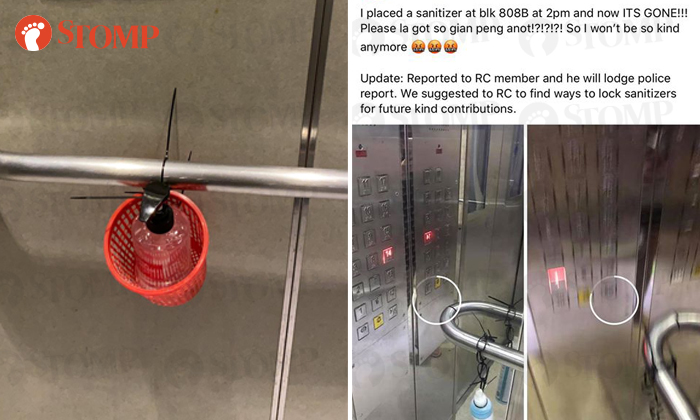 Kind residents have been leaving necessities such as masks and hand sanitisers for community use in the lifts of various estates — but it seems like some people are taking things for granted.

Two Stompers shared how the hand sanitisers in the lifts of their HDB blocks in Serangoon and Choa Chu Kang were allegedly stolen.

Stomper Shila, who resides at Block 141 Serangoon North Avenue 2 with her family, said: "My sister, who works at Guardian pharmacy, thoughtfully left some hand sanitiser in Lift D, where our unit is, for everyone to share."

Shila's sister had placed a bottle of hand sanitiser in a basket, which she attached to a railing in the lift, on Thursday (Mar 12).

However, the basket and hand sanitiser were gone by Friday.

"It's sad to see this happening. A kind act was replaced with theft. I thought Singapore is a first world country but the actions of some people are questionable."

Meanwhile, Stomper Keat Hong Admin shared how a bottle of hand sanitiser went missing on the same day it was placed in a lift at Block 808B Choa Chu Kang Avenue 1. 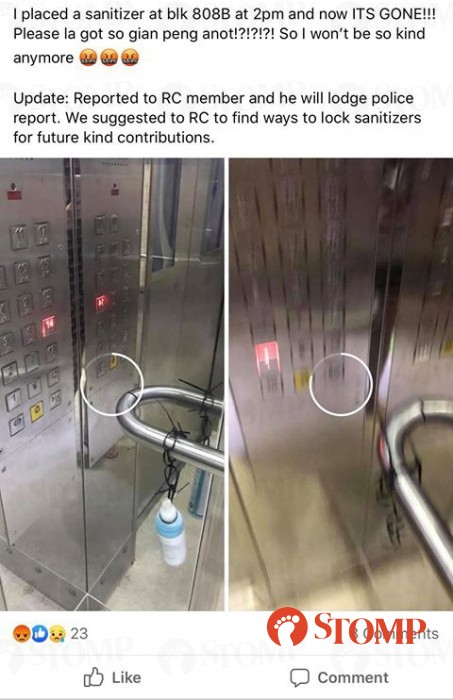 The Stomper said: "Other people left the hand sanitiser in the lift out of their good heart but it ended up being stolen."