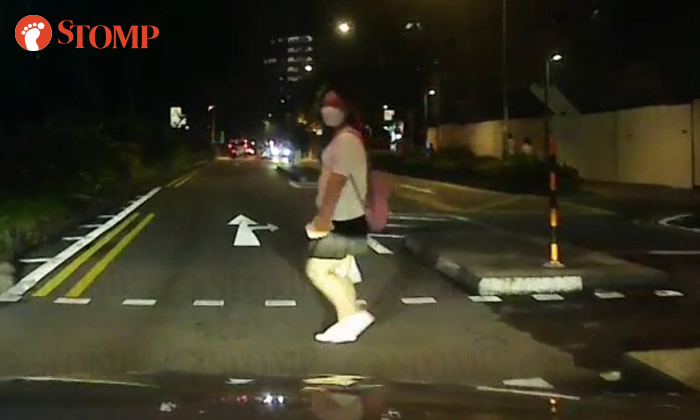 A driver had to stop for a pedestrian who crossed the road even though the traffic light was not in her favour.

The driver, Stomper Jim, was further annoyed by how nonchalant the woman was about her behaviour and the look that she gave him.

Jim shared dashcam footage of the incident that occurred along Yishun Street 81 on Monday (Mar 28), at around 8.30pm.

He told Stomp: "This crossing is located near the Nee Soon South Community Club. Many pedestrians tend to ignore the traffic light status, which is arguably okay as long as there is no approaching vehicle.

"But it is rather annoying when a pedestrian ambles across nonchalantly and casts a look at the driver, knowing that the driver is forced to stop even though the light is in his favour.

"This woman felt entitled to cross the road at this controlled pedestrian crossing even when the 'don't walk' signal is flashing. She expects cars to stop for her.

"The least she could have done if she did not want to stop for the vehicle to pass is to try to hurry across, instead of strolling casually across."

Related Stories
Pedestrians dash across Clementi Road and one gets hit by car, but who's at fault?
Jaywalking woman hit by car in Ang Mo Kio after appearing out of blind spot
Jaywalkers lash out at lorry driver who honked at them -- but end up embarrassing themselves
More About:
pedestrian
dangerous
near-miss
near-accident
jaywalk
jaywalking