See, this is exactly why we aren't supposed to eat and drink on trains 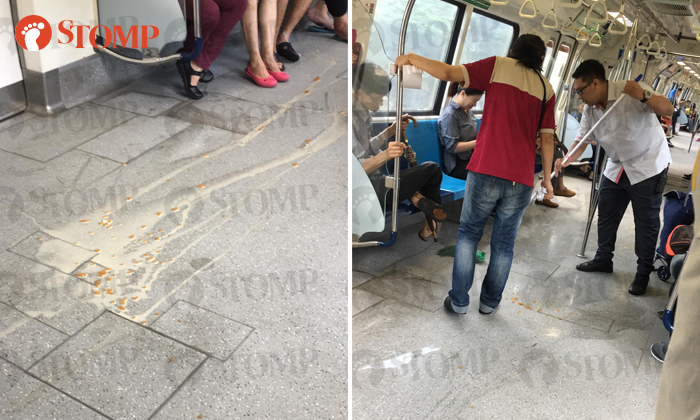 When Stomper Mohd boarded a train on the North-South Line at Woodlands MRT Station last Friday (June 22), he was greeted by an unusual and unsightly scene.

According to Mohd, someone had spilled a soy milk drink with jelly bits on the train floor.

He told Stomp: "It was around 2pm and when I entered the cabin, this was what I saw." 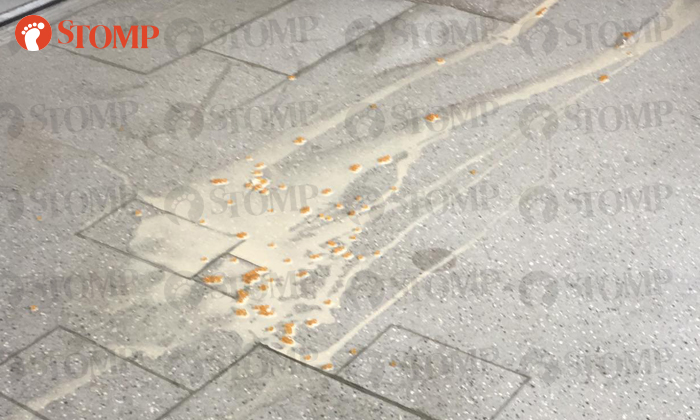 Mohd said that he then informed SMRT about the incident through WhatsApp and they responded immediately.

"I thought it was quite urgent as the spill was right in front of the door and someone might slip," added the Stomper.

"A cleaner and an SMRT employee boarded the train at Yishun station to clean up the spill.

"The employee set a good example by helping the cleaner.

"I feel that drinks should be totally banned on trains even though we are not supposed to consume food or drink on board."

According to SMRT's website, eating and drinking in trains and stations is not permitted under the Rapid Transit Systems Act.

The website also states: "Drinking plain water, or any beverage for that matter, is not permitted because the beverage could spill and wet seats, soil other commuters’ belongings or cause a fellow commuter to slip and fall."

Check out more photos of the incident in the gallery.