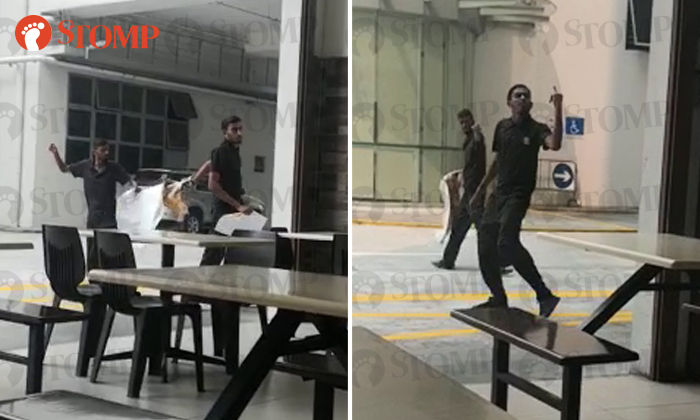 Security officers at an industrial building in Yishun were caught on camera in a dispute with a food stall owner and pointing their middle fingers at him.

Stomper R shared a video of the incident that occurred at a coffee shop in North Spring Bizhub in September this year.

In the video, two security officers can be seen tearing a banner down from the wall of a coffee shop and flashing their middle fingers before stalking off angrily.

R told Stomp: "My friend sent me the video and asked, 'Do the security officers have the right to tear down the banner and damage it without the owner's consent?'"

According to Shin Min Daily News, the saga started when a fishball noodle stall opened in a coffee shop at the building on Sep 17.

Mr Lin, the stall's 56-year-old owner, said he put up a banner measuring over 1m-long at the coffee shop to advertise the opening.

However, the building's management requested for the banner to be taken down. 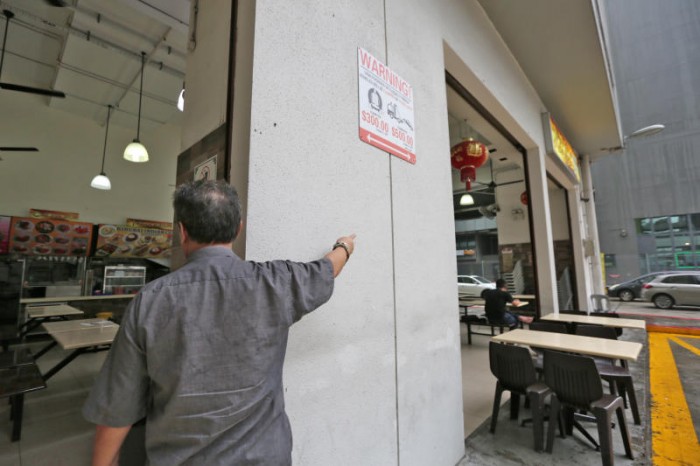 Mr Lin, citing that he had never heard of such regulations and how even the coffee shop's owner had told him that it was not an issue, ignored the management's request.

Mr Lin received another warning the following day at around 10am, but declined to remove the banner as he felt that he was just doing business normally.

That was when security officers showed up.

Mr Lin recounted: "Two security officers forcibly tore off the banner when I refused to take it down. I asked them to return it to me but they refused, so we got into an argument.

"They even flashed their middle fingers at me."

Mr Lin and his staff immediately approached the building's management to discuss the matter, but was reportedly told the management had simply acted according to the rules.

Mr Lin lodged another complaint the next day, but was unsuccessful. He then made a police report.

According to Mr Lin, he earned more than $500 per day during the first two days of the banner being displayed.

However, his earnings have dipped to around $100 ever since the banner was removed and he has been making losses for almost two months.

But as he has already signed a one-year contract, he has no choice but to carry on the business.

Responding to queries, the building's management said they had given Mr Lin a verbal warning on Sep 17 and Sep 18, about how he was not allowed to display banners in public areas.

The management also said that Mr Lin had verbally abused the security officers and tried hitting them with a chair on Sep 18, which was what led them to tear the banner down.

The security officers were subsequently counselled and the banner was put back up on the same day, added the management.

According to the management, Mr Lin was given a final deadline of 12pm on Sep 19 to remove the banner, but he refused to cooperate.

Therefore, the banner was forcibly removed at 4pm that day.

However, Mr Lin denied verbally abusing the security officers and throwing a chair at them, adding that they had only quarrelled with each other.

Meanwhile, the coffee shop's owner and other stall tenants said they were unaware about regulations that prohibited the display of banners in public.

The building's management refuted this by saying that the rule is clearly stated in the management manual, which every stall owner has a copy of.

Those who wish to display banners in public are required to apply for a permit from the building's management in advance.

The management would then review the application and determine if the banners would be an eyesore before granting approval.

However, they said that Mr Lin made no such application.