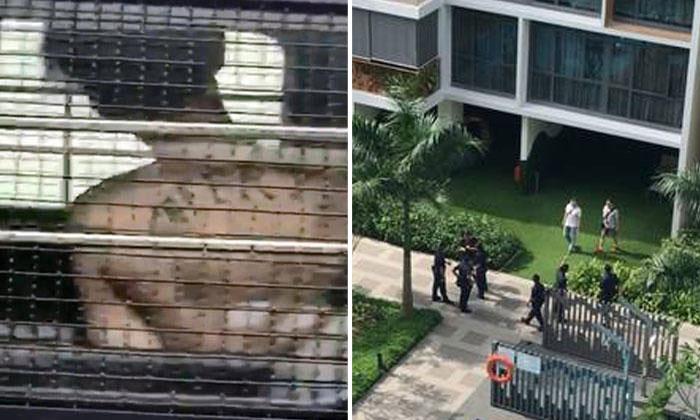 A condominium's security guard has been sentenced to jail and caning after he armed himself with a pair of scissors then broke into a room to molest a maid.

Jeffry Ali, 33, was off duty when he entered the ground floor apartment at his workplace through an open window and took the scissors from the kitchen before going to the room where the Myanmar national was asleep with her employer's two young children.

The Singaporean cut open her top, kissed her, sat on top of her and said that he wanted to marry her.

Jeffry was sentenced on Thursday (July 11) to three years and four months' jail with three strokes of the cane.

He pleaded guilty to one count each of molestation, housebreaking and drug consumption.

The 34-year-old Myanmar national, who cannot be named due to a gag order, woke up when she felt somebody pulling her legs and saw Jeffry, who she did not know, standing nearby.

He told her to keep quiet and she complied out of fear, before the employer's mother heard a disturbance and went to investigate.

She shouted for her son and daughter-in-law, who confronted Jeffry.

Deputy Public Prosecutor Tan Pei Wei said: "The accused told them to keep quiet and leave as he had a pair of scissors with him. At this point, the children woke up and began to cry."

He allowed the maid's employer and his wife to take the children out of the room but continued holding the maid down on a mattress.

Jeffry finally let the woman go and left the unit through the main door after the employer said that he would call the police. However, the intruder left behind items including his debit card and drug paraphernalia.

The employer alerted the police at around 5.40am, and a resident later reported that up to 50 police officers and 17 vehicles, including four from the Special Operations Command, were deployed at the property, located in north-western Singapore.

On Thursday, the court heard that Jeffry broke into another unit there later that morning, and stole RM643 (S$210) and $212 in cash before fleeing.

Police arrested him at the condominium's basement carpark at around noon.

Urine tests later showed that Jeffry had consumed methamphetamine, and the court heard that he consumed the drug about three times a week to remain alert at work.

For outraging the maid's modesty, Jeffry could have been jailed for up to 10 years and caned.