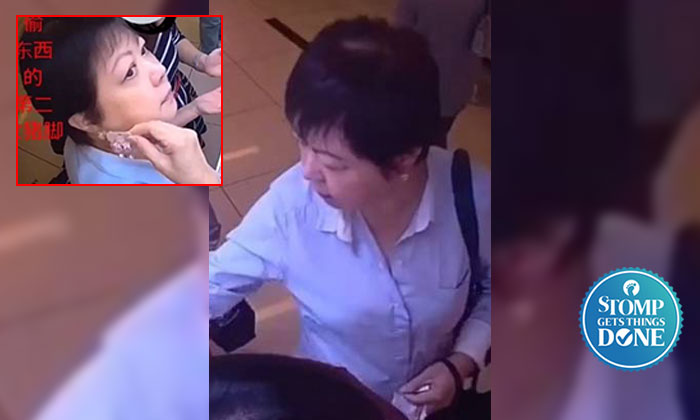 A second woman caught on closed-circuit television (CCTV) footage stealing from Stomper Anon’s pushcart stall at Raffles Place has returned the money for a pair of earrings which she allegedly took.

The first woman, who struck on March 28, has since written an apology letter and paid Anon $24 for the earrings taken.

Anon told Stomp that the second woman paid a visit to his stall on Tuesday afternoon (April 17), between 12pm and 1pm.

According to Anon, the woman had no intentions to apologise from the beginning.

She allegedly accused Anon of having made a mistake, citing blind spots in the CCTVs, and apparently insisted that she had not taken the earrings.

Anon calmly replied that he has in his possession the actual footage of her taking the earrings, and he could show it to her.

Said Anon: "I told her that If she is innocent, she doesn't need to worry so much. Just go and call the police."

Apparently knowing that she would not have her way, the woman confessed that she had taken the earrings, and paid Anon for the stolen goods, said the Stomper.

She reportedly pleaded with Anon to take down the video, saying that she works in a law firm nearby, and the video could cause her to lose her job.

Anon said: "I already did her a favour by not involving the police, but this woman clearly had no intention to reflect on her wrongdoings.

"Asking me to play along and say that she did not steal despite the evidence is impossible."

Anon also expressed gratitude to Stomp, citing: "Both women showed up in a week after the Stomp report, thanks for your help!"