Second maid rescued from ledge of Bendemeer flat in 3 months, gets arrested 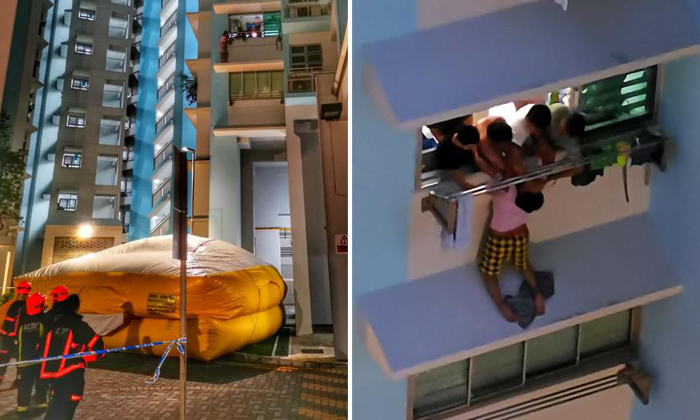 For residents of Block 38A in Bendemeer Road, the sight of a maid stranded on the ledge outside a fourth-storey unit on Wednesday evening brought a sense of deja vu.

They had seen a similar scene play out on the same ledge less than three months ago, only it was a different maid then.

In the July 28 incident, the Indonesian maid had apparently fallen from the kitchen window of the four-room flat while collecting laundry.

Neighbours rushed to help the flat occupants hold on to the terrified woman until Singapore Civil Defence Force (SCDF) officers climbed up a ladder to rescue her.

It was the maid's first day at work, said her employer's daughter, 24, who added that the agency subsequently sent her back to Indonesia.

In Wednesday's incident, it appears the new maid, whose nationality is not known, had climbed out to the ledge as she resisted attempts to rescue her, even after the police arrived.

Witnesses told The New Paper yesterday they saw the maid squatting on the narrow ledge below the kitchen window.

One of them, who wanted to be known only as Miss Maggie, said: "She was holding tissue paper and wiping away her tears."

The 37-year-old chef was in her third-storey unit when she heard the sound of police cars below.

"There were a lot of police officers inside the unit, trying to persuade her to get back inside," she said.

Meanwhile, SCDF officers set up a safety life air pack at the foot of the block as a precautionary measure, said its spokesman.

Miss Maggie said: "After a long while, the maid finally stood up to cooperate with the police. She was grasping what looked like a black handle."

A video taken at the scene shows the maid standing on the ledge as police officers speak to her from the kitchen.

Miss Maggie said the police officers tried to pull her through the window but were unsuccessful.

Officers from SCDF's Disaster Assistance and Rescue Team eventually rappelled down the block to get the domestic helper safely into the flat.

The police said a 41-year-old woman was arrested for attempted suicide and investigations are ongoing.

TNP understands the two domestic workers were employed to take care of an elderly woman living in the flat.

It is unclear if the maid in Wednesday's incident was the replacement for the Indonesian maid.

When TNP went to the flat yesterday afternoon, people could be seen inside, but they did not answer the doorbell.

Chinese-language newspaper Lianhe Wanbao reported the family had not expected another helper ending up on the same ledge after the first incident.

"We don't know why the maids are like this. We have always been good to them," an unidentified family member told Lianhe Wanbao.

Madam Yvonne Lim, 55, who lives a few units away from the flat, was also surprised by the latest incident and said the family mostly kept to themselves.

A boy who lives on the fifth storey, Muhd Irfan, 15, was on his way home when he saw police cars at the block.

The student said: "I thought someone had committed suicide. I was shocked to see the woman still on the ledge."

A fourth-storey neighbour, Madam Kanchan Sharman, 39, said: "I saw her face after they rescued her. She was sitting up on a stretcher at the lift lobby. She looked terrified."

Related Stories
Maid clings on to clothes rack after accidentally falling out of 4th-storey window at Bendemeer
Maid falls 4 storeys from Bishan block, says she does not remember what happened
63-year-old man arrested at Bendemeer Road
More About:
maid
rescue
fall
suicide attempt