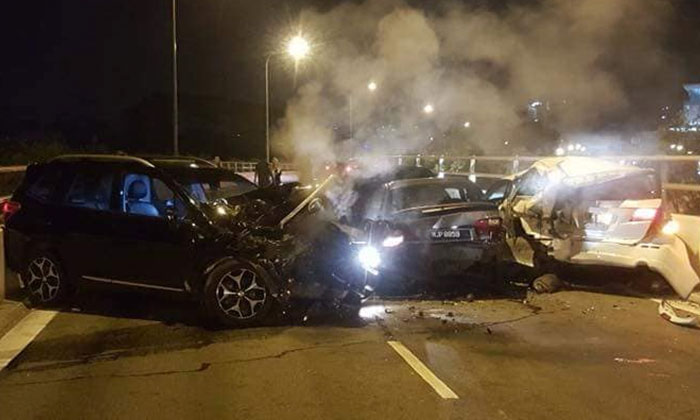 Two drivers were injured after a traffic accident involving four cars occurred at the departure viaduct of the Woodlands Checkpoint at about 3.28am on Sunday (July 1).

At least three of the vehicles looked heavily damaged, with smoke billowing from the wreckages.

The police told Stomp that they were alerted to the incident at 3.28am.

Two male drivers, aged 32 and 51, were conscious when conveyed to Khoo Teck Puat Hospital for treatment.

Stomp understands that three of the vehicles involved were Singapore-registered cars. The remaining vehicle was a Malaysian-registered car.

Earlier, the Immigration and Checkpoints Authority (ICA) posted up an advisory on its Facebook page, informing motorists that the departure viaduct at Woodlands Checkpoint was closed.

It also advised the public to follow the instructions from its officers and drive carefully.

This marks the second accident on the Causeway in two days.

On June 30, another accident involving a trailer, a lorry and three motorcycles saw two people killed and three others injured.