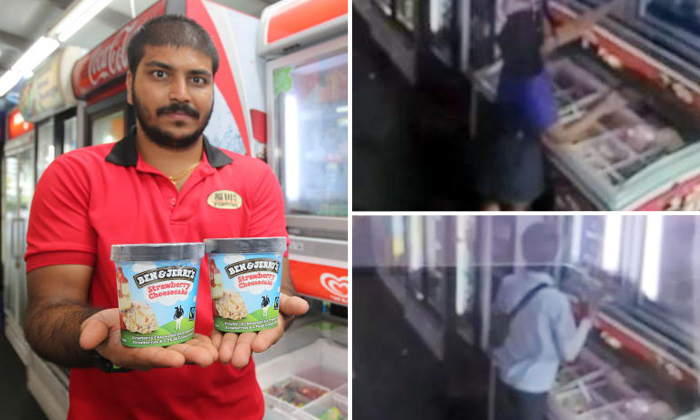 The incident, which occurred at around 3.21pm, was caught on camera.

Mr Tan, the supermarket's 50-year-old boss, told Lianhe Wanbao that the outlet has been operating for three years and that ice cream started disappearing from the store around one year ago.

CCTV footage provided by Mr Tan shows a boy and a girl opening a freezer in the supermarket and taking a tub of ice cream each before leaving.

The boy was wearing his school's co-curricular activities shirt while the girl was in her school uniform.

Store employee Jonathan, 29, told Wanbao that he was collecting payment at the counter when a customer informed him that the students had left the store with ice cream.

He added: "I immediately gave chase but they were already gone. When I went back to the store and checked CCTV footage, I realised that they were students from a secondary school nearby."

According to Jonathan, the pair took two tubs of Ben & Jerry's ice cream worth $27.80 in total.

A police report has been made.

Mr Liang Yongqiang, 36-year-old manager of the supermarket, said he believes that it is not the students' first time doing this.

"Since last year, we often have people telling us that the doors to the ice cream cabinets outside were open. We always thought that customers had forgotten to close the doors," he added.

Mr Liang also said that besides the two students who were caught on camera, there have been two to three others who often came to the supermarket after school without making any purchases.

When contacted by Wanbao, the school said that the matter was under investigation and declined to comment.