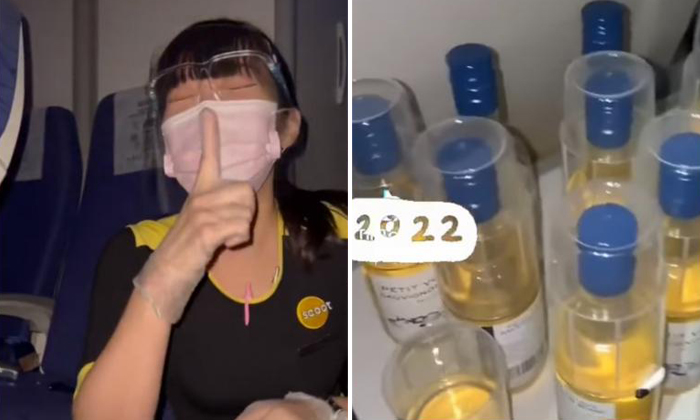 A video circulating online of two shirtless and maskless men and a woman in a flight attendant uniform has prompted Scoot to launch an investigation, the airline confirmed on Tuesday (Jan 4).

About 15 seconds long, the video appears to have been shot in a plane and also shows more than 10 small bottles of alcohol on a seat tray table.

The woman, whose uniform looks similar to that worn by the airline's cabin crew, is seen donning disposable gloves, a face shield and mask.

One of the men holds a bottle in one hand while drinking from a cup. The other man appears to be dancing while the woman signals for them to be quiet.

In another shot, several empty bottles of wine and cups can be seen on a tray table.

In response to queries from The Straits Times, a Scoot spokesman said that investigations are being carried out.

"Scoot treats the safety and well-being of passengers and crew with utmost importance. We are aware of the edited video posted to social media, and are investigating to ascertain the facts."

The video does not show anyone else on the plane and it is unclear where it was shot.