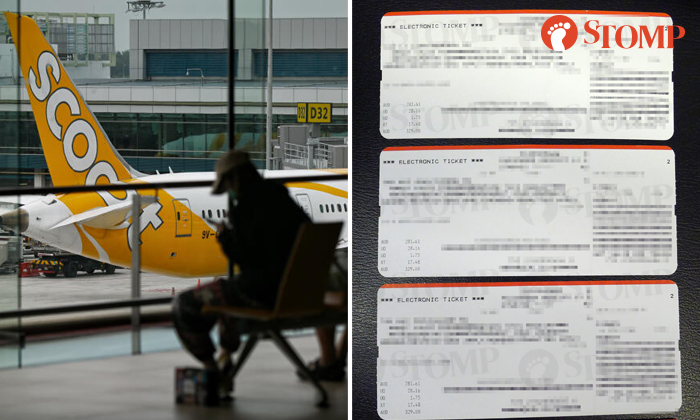 A group of three friends had their trip to Australia all booked, paid for and planned out.

Little did they know that their dream vacation would turn into a holiday nightmare fraught with anxiety, said Stomper De.

De and two friends had booked two-way tickets from Singapore to Sydney to Hobart for a trip from November 26 to December 5.

The booking was made via Scoot on September 9 and cost a total of $3,661 for three pax.

However, only the Singapore-Sydney and Sydney-Singapore flights are operated by Scoot while the Sydney-Hobart and Hobart-Sydney ones are interline flights operated by Virgin Australia. 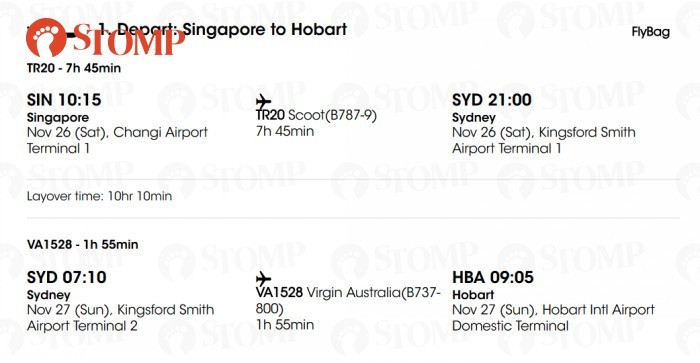 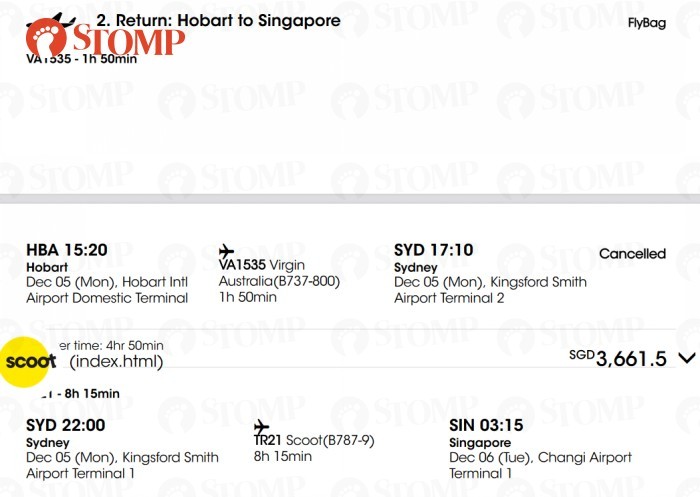 All was well until the trio landed in Sydney, said De.

She told Stomp: "When we reached Sydney Airport, the check-in counter staff said that our flight bookings on the Sydney to Hobart leg on Virgin Australia did not exist on their system.

"Virgin Australia said they couldn't do anything as we had booked through Scoot and hence Scoot has to rectify the issue. We tried calling Scoot's hotline but to no avail.

"As time was running out, we had no choice but to buy tickets on the spot at the airport, which cost a total of $1,027 for three pax.

"During our time in Hobart, we kept checking our bookings and saw that our Hobart to Sydney tickets had been cancelled too.

"We called in many times to resolve the issue but Scoot's Phone Support was not very 'supportive'. Their personnel did not understand our issue and instead kept saying that she would cancel all our remaining flights and refund us.

"Subsequently, we had no choice again but to purchase new tickets for our Hobart to Sydney flight as we could not afford to miss our flight from Sydney to Singapore. The cost of the Hobart to Sydney tickets cost $996.57 for three pax.

"When we reached the domestic airport in Hobart on December 5, I asked the check-in staff why our 15:20h flight from Hobart to Sydney was cancelled. I wanted an official statement from them.

"The staff said that this flight timing has not existed since April 2022, thus he was unable to provide any statement.

"If this flight timing does not exist anymore, how come we were able to make a booking for this flight in September 2022?

"The above situation caused us lots of stress and anxiety, especially during our time in Hobart. Our supposedly 'relaxing' holiday turned into a nightmare and was very stressful as we kept worrying about our flight back."

De is seeking a refund of $2,023.57 from Scoot for the new flight tickets that she had to purchase in Australia.

In response to a Stomp query, a Scoot spokesman said on December 28: "We sincerely apologise for our customer's experience, when she flew on an interline flight operated by Virgin Australia from Singapore to Hobart.

"Due to a technical error, scheduling updates from Virgin Australia about flights VA1528 (from Sydney to Hobart) and VA1535 (from Hobart to Sydney) were not updated in our booking systems.

"We have since reached out to the affected customer and are in the midst of arranging a refund for her Virgin Australia flights.

"Once again, we would like to apologise for the inconveniences caused. We will also continue to review our systems and processes to ensure a more seamless travel experience for our customers."

De confirmed with Stomp that she subsequently received an email from Scoot informing that her refund application on December 5 was successful, but said she has yet to receive the refund as of Saturday (Jan 7).

Related Stories
Passenger on flight that returned to Perth was left 'hungry, cold and at a loss', Scoot apologises
Man lies across plane seats with shoes on during flight: Scoot makes appeal to customers
Unruly passengers escorted off Scoot flight after refusing to fasten their seatbelts for landing
More About:
Scoot
flight
airport