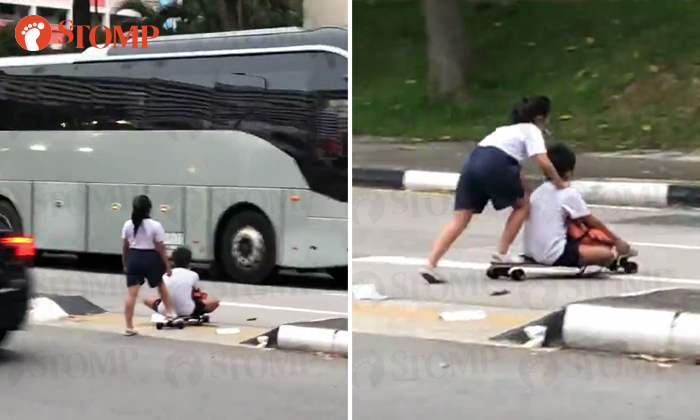 The sight of two young children playing with a skateboard at a busy road along Redhill Close left a passer-by feeling concerned and disturbed.

Stomper Andrew witnessed the incident on Monday (Oct 26), at around 6.30pm.

In a video that he sent to Stomp, a young girl can be seen standing behind a young boy who was seated on a skateboard, with her own foot on the device.

The two kids were in the middle of the road, along a road divider.

They appeared to be waiting for oncoming traffic, which included buses, to pass.

Andrew said: "These schoolkids were dangerously riding a skateboard across the main road of Redhill Close, near Redhill Market.

"Based on the video, traffic was moving on both sides of the road."

Andrew told Stomp that he did not see any adults accompanying the children, adding: "This is a disturbing sight where an accident is waiting to happen with such a reckless act."

Related Stories
Things could have gone awry for little boy who whizzed across road on kick scooter
So risky! Pedestrians cross road after losing patience over traffic light in Toa Payoh
Driver should have allowed pedestrian with toddler in pram to cross road first
More About:
dangerous
child