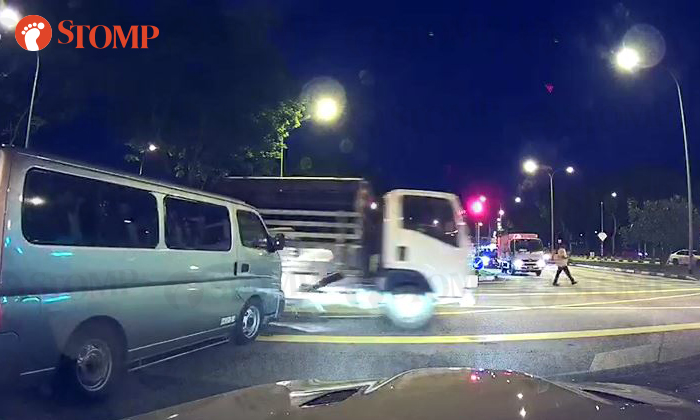 A school van had crashed into a lorry after beating a red light at a traffic junction along Bishan Road at around 6.45am today. (Jan 16)

Stomper Julian, who was driving his son to Raffles Institution, witnessed the accident and later sent dashcam footage of the incident to Stomp.

The school van was seen making a turn at a traffic light junction when the lights had turned green. However, as it approached the next traffic junction, it did not stop even though the traffic lights were red.

It ran the red light and crashed into the side of a lorry that was ferrying workers.

Julian told Stomp, "I can see that the van was carrying school children when the van had stopped at the earlier traffic junction."

The Stomper also said that the children and the workers "should be fine" as the impact "did not seem to be great".

"This is a timely reminder to all motorists to be alert and careful on the road, especially bus drivers who are responsible for the safety of children whom they have been entrusted to ferry to schools," added the Stomper.

In response to Stomp's media queries, the police and the Singapore Civil Defence Force said that they were not alerted to the incident.