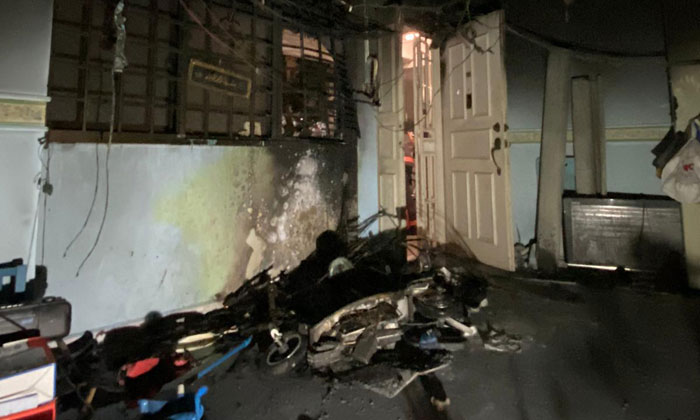 Three people were rescued from a Sengkang flat after a fire broke out in the unit's living room in the early hours of Tuesday morning (Mar 10).

The Singapore Civil Defence Force (SCDF) said in a statement on its Facebook page that it responded to a fire at a fourth-floor unit at Block 111 Rivervale Walk at about 5.30am.

"Three persons were trapped in the unit near the living room window," the SCDF said.

"SCDF firefighters conducted forced entry into the unit through this window to rescue the occupants.

The fire was extinguished with one water jet.

All five people refused conveyance to the hospital.

About 80 residents from the block were evacuated by the police and were subsequently allowed to return to their homes.

Preliminary investigation into the cause of the fire showed it was of electrical origin from a non-UL2272 certified personal mobility device (PMD), which was charging at the time of the fire.

The SCDF reminded the public on the prevention of PMD fires with the following fire safety tips:

The Land Transport Authority (LTA) encourages all PMD owners to use UL2272 certified devices and to look out for the UL2272 Certification Marks.

Refer to LTA’s website for more information on UL2272 certification and an indicative list of UL2272 certified devices available in Singapore.

All owners of non-UL2272 certified PMDs are strongly encouraged to dispose of their devices at designated disposal points as soon as possible. For more info, refer to go.gov.sg/pmddisposal.