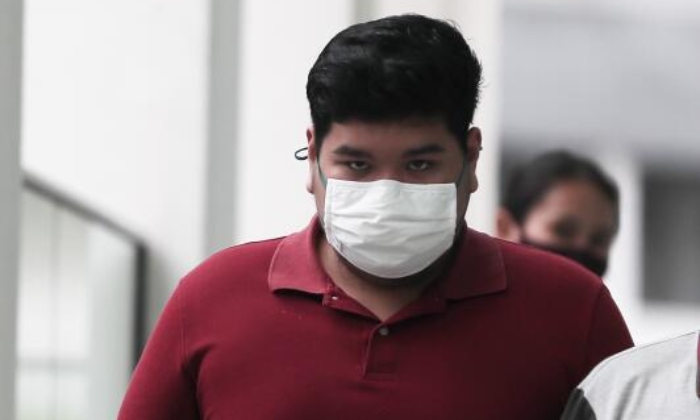 Dressed in an emergency medical services (EMS) T-shirt with black trousers, a full-time national serviceman with the Singapore Civil Defence Force (SCDF) told a sentry officer at Sengkang Fire Station that he was an off-duty EMS officer and needed to speak with a colleague inside.

Haziq Syamim Esa, who had cycled to the fire station, was allowed to enter the premises at around 3am on March 12, and he stole an ambulance parked at a bay.

He then drove the ambulance to The Amore condominium in Edgedale Plains, Punggol, to visit his girlfriend who lived there.

Other SCDF officers later spotted him at the condominium and the police were alerted.

The 21-year-old Singaporean pleaded guilty in a district court on Wednesday (Nov 4) to one count each of theft and cheating. He also admitted to an unrelated charge of causing hurt to another person by performing a rash act.

The court heard that in the early hours of March 12, an SCDF paramedic had driven the ambulance to the fire station and parked it at the bay, with the engine on.

Deputy Public Prosecutor Cheng Yuxi said: "As part of standard operating procedures, the driver did not lock the ambulance and left the key inside the ignition with the engine running, as this would enable faster response to incidents."

Haziq later entered the station and drove away in the ambulance.

When he reached the condominium, he turned on the ambulance blinker lights and duped a security guard there into believing that there was a medical emergency.

The DPP told the court: "The accused therefore intentionally induced (the guard) to lift the barrier for the ambulance to enter as it was an emergency vehicle."

SCDF officers at the station found the ambulance missing at around 4am and deployed a group of firefighters on a light fire attack vehicle - also known as a red rhino - to look for it.

They found the vehicle at the condominium later that morning and Haziq was detained.

In an unrelated incident, Haziq drove a rented Toyota Prius to Giant Hypermarket at Tampines North Drive 2 on May 2 and approached a couple after telling a security guard that he was there to pick up passengers.

A taxi driver went up to him and told him that touting was illegal. An argument broke out between the two men following which Haziq returned to his vehicle.

But the taxi driver tried to stop him from leaving by standing in front of his car. Haziq then swerved the car to the right, hitting the cabby who fell to the ground.

Haziq drove off instead of stopping to render assistance. The court heard that the taxi driver suffered scratches on his right elbow.

On Wednesday, the court heard that Haziq has a history of schizophrenic disorder. The court has called for reports to assess his suitability for probation and a mandatory treatment order (MTO).

Offenders given an MTO have to undergo treatment to address their mental conditions in lieu of imprisonment. Haziq will be sentenced on Dec 11.