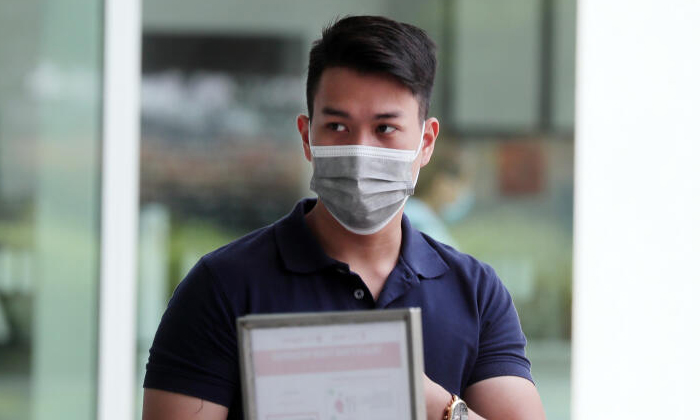 A Singapore Civil Defence Force (SCDF) full-time national serviceman ignored the doctor's orders to stay at home after showing symptoms of Covid-19 and instead visited Bugis Junction and the skate park in Somerset.

He found out later that he had tested positive for the coronavirus.

Fathullah Abdul Rahman, 23, was sentenced to 18 weeks in prison on Monday (Oct 11) for flouting orders to remain at home while on medical leave and awaiting the results of his Covid-19 swab tests.

He faced four charges in court for breaching stay-home orders while on medical leave on four occasions last year.

On Sept 17 last year, he had a runny nose, sore throat and cough and was diagnosed with upper respiratory tract infection (URTI).

The doctor gave him a swab test for Covid-19 and three days of medical leave until Sept 19. This required him by law to remain at home until he received a negative test result.

But the next day, Fathullah left his home in Geylang and took a train to the skate park in Somerset Road and then to Bugis Junction, according to court documents. He returned home only at 10pm, after spending 10 hours outside.

After his test result came back positive the next day, he was taken to Changi General Hospital and hospitalised for four days. He was then quarantined at D'Resort in Pasir Ris and discharged on Sept 27 last year.

In three other incidents that month, he breached stay-home orders to visit the Singapore Expo, the Ikea store in Tampines, and Kallang.

On Sept 3, he met his friend Nurin Insyirah Mohamad Thaha at Bedok MRT station and the pair travelled to the Kallang area to spend time together. Their relationship was not disclosed in court documents.

Fathullah returned home only at 8pm, after 8½ hours outside.

This was despite him being on medical leave between Sept 2 and 4 after he was diagnosed with gastritis and URTI and having yet to receive a negative result for his Covid-19 swab test.

Seeking five to six months' jail, Deputy Public Prosecutor Yong Ngee Goh said: "While he is relatively young, (Fathullah) is by all intents and purposes an adult."

A significant response was needed to deter like-minded offenders who make light of the pandemic, the DPP added.

In mitigation, defence lawyer Yamuna Balakrishnan noted that while it was no excuse, there was a lack of space at home for Fathullah as he lives in a three-room flat with six others, with him occupying the living room.

Fathullah had been selected to undergo training to be a section commander in the SCDF and this was terminated after he was caught - a price paid for his actions, Ms Yamuna argued.

This was his first brush with the law and he wanted to sign on as an SCDF regular, the lawyer added.

District Judge Christopher Goh responded saying: "I am assuming you are saying he is not wise of the ways of the world... that he is too young and immature, but yet he is a section commander."

He told Fathullah that this was a chargeable offence even without the pandemic.

"Not only did you stay out for a long (time), but when you tested positive after going to the skate park, you put in danger everyone else around you," said the judge.

"That is an aggravating factor to be weighed against the fact that you pleaded guilty at an early stage."

In response to queries from The Straits Times, an SCDF spokesman said: "SCDF expects our officers, including full-time national servicemen, to uphold exemplary standards of conduct, integrity and discipline at all times."

Those who flout stay-home orders while on medical leave and awaiting Covid-19 swab test results can be jailed for up to six months and fined up to $10,000.