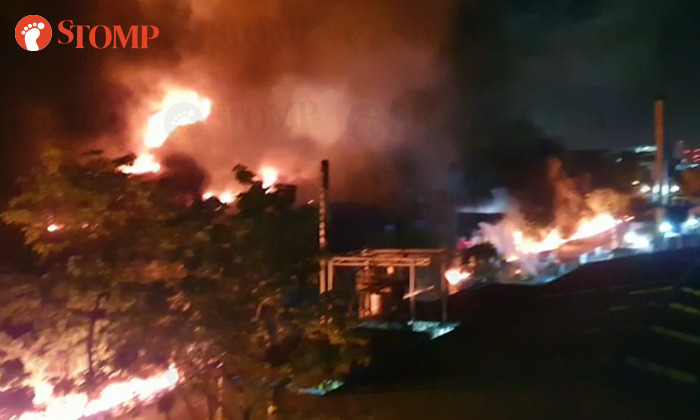 About 100 firefighters battled a fire for hours in an industrial area in Tuas on Tuesday night (March 17). One person was injured.

In a tweet at 8.11am on Wednesday, the Singapore Civil Defence Force (SCDF) said the fire, the size of about one and a half football fields, was still raging.

"The firefighting operation is ongoing. SCDF has surrounded and contained the fire. The affected area is filled heavily with smoke. Members of the the public are advised to stay away from the area," it said.

One person suffered burn injuries and was taken to Singapore General Hospital.

The fire engulfed a five-storey high warehouse and was also spreading along the drains, SCDF said.

The blaze largely involved drums of flammable substances such as diesel and cleaning agents.

An unmanned aerial vehicle was deployed to monitor the situation from the air.

Thick smoke from the fire could be seen based on pictures on social media.