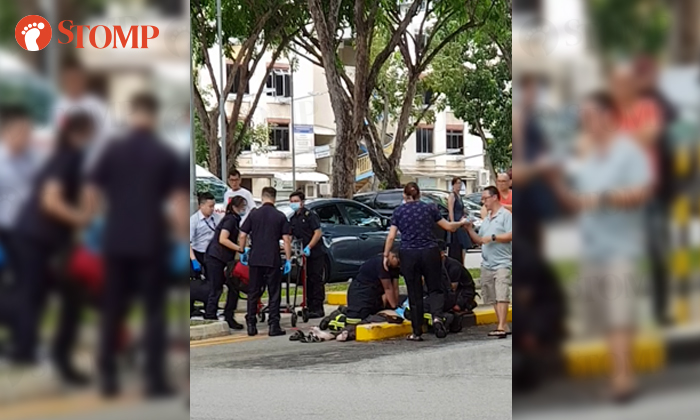 Stomper Moonwalker was on his way to meet a friend on Monday morning (June 17)  when he saw personnel from the Singapore Civil Defence Force (SCDF) and St John's Ambulance Brigade (SJAB) join arms to save an elderly man at Toa Payoh.

Moonwalker said: "At about 10.30am, I saw a senior citizen lying on the road at the entrance of a carpark, opposite Fairprice supermarket and near Block 191 Toa Payoh Lorong 4."

In a video Moonwalker shared with Stomp, a person can be seen performing cardiopulmonary resuscitation (CPR) on a person lying on the road.

In response to Stomp queries, the SCDF said: "Members of the public performed CPR and administered the automated external defibrillator prior to the SCDF's arrival. One person was conveyed to Tan Tock Seng Hospital."

Stomp understands that a staff member and a volunteer from St. John's Ambulance Brigade, as well as another member of the public, stepped in to lend assistance.

Moonwalker commented: "We usually think that the SCDF only fight fires, but I was so impressed to see them being so skilled in attending to someone experiencing a heart attack.

"Although they're taking turns to perform what seems to be a simple procedure, I can vouch that it is still a lot of hard work.

"I'm so proud of these skilled SCDF men, it isn't often that we get a chance to see them in action."