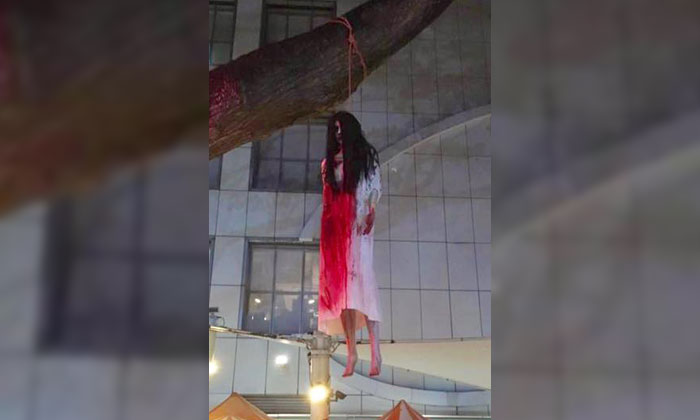 A controversial Halloween display at *Scape in Orchard Road has been taken down following online backlash.

The display showed a mannequin with long black hair hanging by the neck from a tree, dressed in a bloodied white dress and was a publicity effort for the *Scape's Halloween event, Museum of Horrors VII: Vengeance.

Facebook page Singaporeans Defending Marriage and Family posted a photo of the installation, slamming the display for its bad taste.

"This is extremely DISTURBING, done in very bad taste and traumatising to children!" the post said.

It also said: "The image of a person who appears to have hanged herself being used to promote fun Halloween activities would surely trivialise the issue of suicide among young people."

A *Scape spokesman has since addressed the matter and said that the mannequin was removed yesterday (Sep 27) morning.

"We have received feedback about the mannequin, and after reviewing internally, we informed the vendor to have it removed from the open public area," he said, reports The Straits Times.

"We hope that the youth will still have an enjoyable Halloween experience at the Museum of Horrors."

Last month, Resorts World Sentosa's fake memorial dedicated to the victims of a fictional mall collapse to publicise its Halloween Horror Nights event was slammed as 'tasteless' and 'insensitive' by netizens.

Related Stories
RWS Halloween event publicity stunt slammed as 'tasteless' and 'insensitive'
$100 'notes' being given away at Orchard Rd -- but here's what they really are
Public vandalism by internet personalities Youtiao666? Relax, it's a marketing campaign
More About:
publicity stunt
horror
criticism
controversy
controversial
Halloween