Scammer sends money to seller for camera lens through 'PayPal'... with Gmail domain 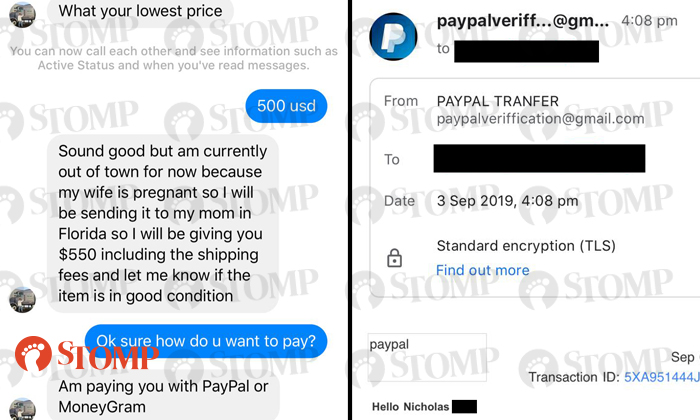 Stomper Nicholas was supposed to receive payment for camera lens that a Facebook user offered to purchase, but realised he nearly fell victim to a scam.

Nicholas said he had listed Canon camera lens worth $829 for sale in a Facebook group.

A user known as William then contacted Nicholas about the item on Tuesday (Sep 3) and asked him for the "lowest price".

Both parties agreed on US$500 (around S$693) and William even offered an extra $50 for the lens to be shipped to his mother in Florida.

"He wanted to pay by using MoneyGram but I was not familiar with it, so I told him to transfer payment via Paypal instead," said Nicholas.

"He agreed. Minutes later, he asked me to check my email. I checked my email and could not find the email but found it in my spam folder."

Nicholas' suspicions were aroused upon seeing the email.

Not only was it sent from a Gmail domain instead of PayPal's own domain (e.g. service@paypal.com.sg), there were also spelling errors in the email address ("veriffication") and name ("tranfer").

There were grammatical errors and random capital letters in the email's text as well.

When Nicholas called out William, the latter insisted that payment was pending and accused the Stomper of being the scammer.

View the rest of their conversation in the gallery.

Related Stories
Seller nearly loses her iPad to scammer who even asked her to pay for courier service first
Woman wanting to borrow $3k gets $500 from moneylender -- but ends up forking out $2.6k
Man buys S9+ online for $500, pays another $250 for "tax and insurance" -- but never gets anything
More About:
scam
text
facebook