Scammer says he's calling via WhatsApp due to "lockdown problem", hangs up when told circuit breaker is over 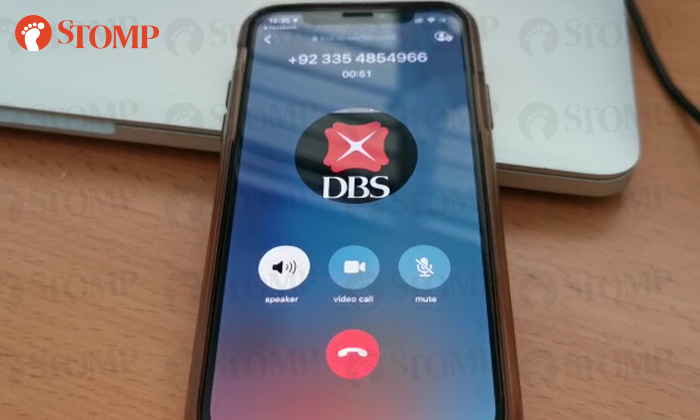 A scammer was left with no choice but to hang up on Stomper Anonymous after being caught in a lie and rendered speechless.

Anonymous said he received a call from a foreign number via WhatsApp on Monday afternoon (July 6), at around 2.35pm.

The caller claimed to be from DBS Bank and even had the bank's logo as its profile picture.

He told Anonymous that his credit card had been "temporarily suspended" but fortunately, the latter was not fooled.

Anonymous told Stomp: "I asked why was he using WhatsApp to call me instead of a landline.

"He said that all bank branches were closed due to a lockdown in Singapore, so I replied that the government had already lifted the circuit breaker and everyone is back at work.

In a video that Anonymous sent to Stomp, the scammer can be heard saying that there were technical issues "from the lockdown problem" and "every branch is not working, sir."

Anonymous pretends to be surprised and replies, "From what I understand, the government of Singapore has lifted the circuit breaker and everyone is back to work, you know."

This effectively leaves the scammer speechless.

Anonymous shared: "He hung up after that.

"We need to educate people not to fall to scams."

For more information on such scams and how you can protect yourself, check out these advisories from DBS and the Monetary Authority of Singapore.

Related Stories
Man who trolled scammer until he spewed vulgarities now leaves another caller speechless
Man trolls scammer claiming to be from DBS and leaves him spewing vulgarities
Another woman scammed of almost $60k after getting Viber call from 'police from DBS'
Widow left with $99 after life savings of over $54k wiped out in Viber scam, police investigating
More About:
scam
funny
troll