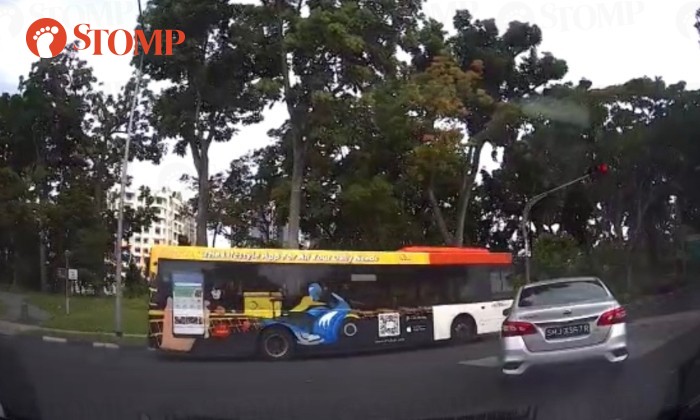 SBS Transit will be taking stern disciplinary action against a bus driver who sped through a red light and almost collided with a car on Tuesday (Aug 4).

A Stomper alerted Stomp about the incident that happened at the junction of Ang Mo Kio Avenue 1 towards Thomson Road and shared footage from his in-car camera.

According to the video's timestamp, the incident occurred at 10.39am.

The Stomper shared: "I was making a right turn towards Ang Mo Kio Avenue 1.

"Suddenly, I saw an SBS Transit bus from the left that failed to stop at the red light.

"I quickly sounded my horn to alert the car in front of me.

"Thankfully, the car managed to brake in time."

The Stomper also mentioned that the bus still sped through anyway.

In response to a Stomp query, Ms Tammy Tan, the operator's senior vice-president of corporate communications said: "We have investigated the incident and do not condone the dangerous actions of this bus captain.

"We take a very serious view of this lapse and will be taking stern disciplinary action against him."

SBS Transit also added that they have reached out to the car driver to extend their apologies.