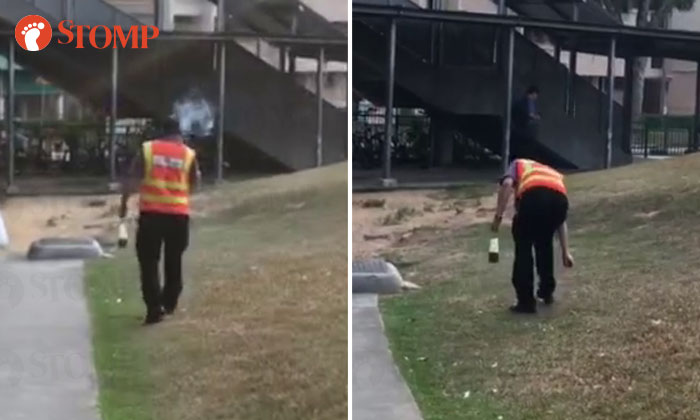 SBS Transit said in a statement to Stomp that it will be taking disciplinary action against one of its bus captains who was caught on video discarding a cigarette butt at a grass patch next to Serangoon MRT Station on Sep 6.

Stomper Kappkun alerted Stomp to the incident and shared a video he took as he was walking behind the bus captain wearing an SBS Transit uniform.

The man is seen smoking and then stopping by the side of the walkway to snuff out his cigarette. He then leaves the cigarette butt on the grass patch.

At the end of the video, smoke can still be seen rising from the discarded cigarette butt.

"This is the kind of trash we see every day," said the Stomper.

"I was walking right behind him when I saw this at about 6.20pm that day."

In response to a Stomp query, Ms Tammy Tan, SBS Transit's senior vice president of corporate communications, said: "Such behaviour does not reflect the values we uphold in SBS Transit and we will be taking disciplinary action against the Bus Captain in question."