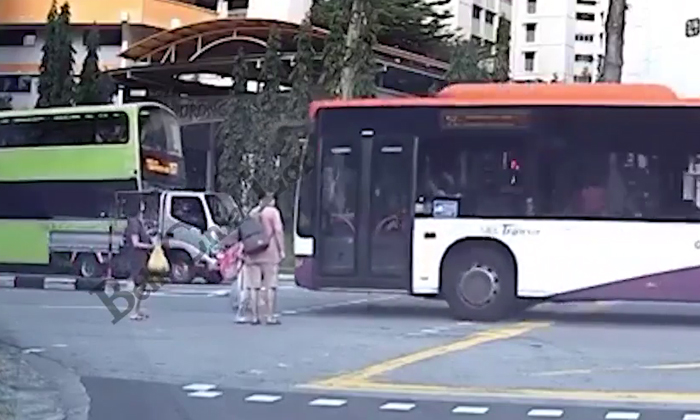 Talk about a close shave. Three pedestrians were some two seconds away from being hit by an SBS Transit bus that ran a red light.

According to a Facebook post shared on Monday (Jan 3), the incident happened along Jurong East Avenue 1 on Dec 28 at around 6.10pm.

An accompanying video – which has garnered more than 17,000 views – shows a man holding his daughter's hand, and a woman crossing the road.

They stopped just in time to avoid the onrushing bus.

Netizens expressed their outrage at the "reckless" bus driver.

SBS Transit told AsiaOne on Monday they had investigated the incident and do not condone the "dangerous actions" of the bus captain.

Ms Tammy Tan, the public transport operator's senior vice-president of corporate communications, said: "We are thankful that no one was injured and would like to apologise to the pedestrians for the distress caused. We take a very serious view of this lapse and will be taking stern disciplinary action against the bus captain."

Under the Road Traffic Act, motorists who run a red light, which is a 12-demerit point offence, will face a $400 fine. Motorists can incur 14 demerit points and be fined $500 if the offence is committed in the Silver Zone or in school zones.