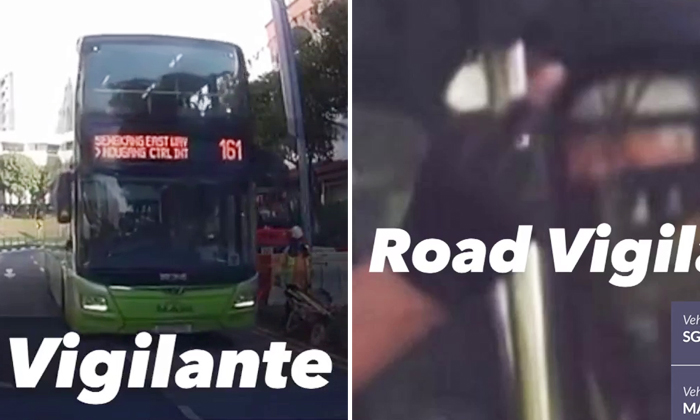 A video of a dispute between a bus captain and a car driver that has been circulating online does not fully reflect what transpired, said SBS Transit.

The transport operator has also lodged a police report against the car driver, it told Stomp on Friday (Aug 18).

SBS Transit's response comes after Facebook page SG Road Vigilante - SGRV posted a video of the incident that occurred along Hougang Avenue 4 on Wednesday (Aug 17), at 9.15am.

The video first shows a construction worker stopping in his tracks by the roadside to let the oncoming bus go by.

The bus is later seen stopping at a zebra crossing to let two pedestrians pass while another two others waited to cross.

The video then shows the bus captain flashing his middle finger at a car driver who had apparently confronted him for dangerous driving.

According to audio, the bus captain also told the car driver in Mandarin to 'wait for him' at the bus depot and "I'll wait for you".

In a caption accompanying the Facebook video, the car driver accused the bus captain of dangerous driving, "squeezing worker at the roadside" and failing to give way to elderly pedestrians.

However, SBS Transit has refuted the allegations.

Mrs Grace Wu, SBS Transit's vice president (special grade) of customer experience and communications, said in response to a Stomp query: "We have conducted an investigation into the incident and would like to share that the footage as shared by the private car driver does not fully reflect what transpired at the traffic junction on Wednesday morning.

"Our bus captain should have maintained his cool even under provocative circumstances. For this, we will counsel and train him to do better.

"With regards to the incident, we would like to share that based on the CCTV footage from our bus, we note that the private car driver was on the right of the bus when both vehicles stopped at the traffic lights.

"The private car driver then moved in front of the bus and for reasons not obvious to us, repeatedly applied the brakes suddenly although there were no traffic conditions ahead that required him to do so.

"He also started to use abusive language against our bus captain and this led to an exchange between both parties.

"We have lodged a police report against the private car driver and will share the CCTV footage with the police."