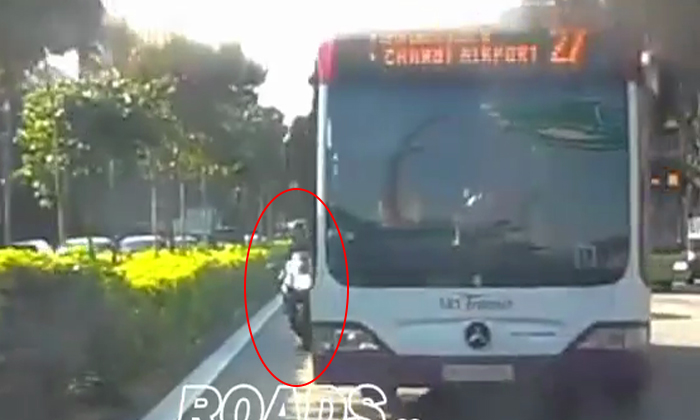 SBS Transit is investigating an incident where bus service 27 was seen veering into a central road divider along the Tampines Expressway (TPE) on Wednesday (March 13).

A motorcyclist was injured as a result of the incident and taken to Sengkang General Hospital.

A video posted by ROADS.sg on Facebook shows how the motorcyclist was travelling on the rightmost lane of the expressway while the bus was on the second-rightmost lane.

The bus then suddenly veered right and hit the central road divider.

It is unclear if the motorcyclist was hit by the bus.

In response to a Stomp query, Ms Tammy Tan, SBS Transit's senior vice-president of corporate communications, said: "Our bus veered into the adjacent lane and a motorcyclist was injured as a result.

"He received outpatient treatment on that day and we have since been in touch with him to render assistance as best we can.

"No one else was injured.

"We are investigating the cause of this accident."

Related Stories
SBS Transit to take action against bus captain after Stomper takes video of him driving dangerously
Driver not sleeping: Neck pains cause him to bend more than normal, but he's fit to drive, says SBS
Cabby who hit road divider and caused man to alight on ECP had blacked out: ComfortDelGro
More About:
accident
Bus
SBS Transit