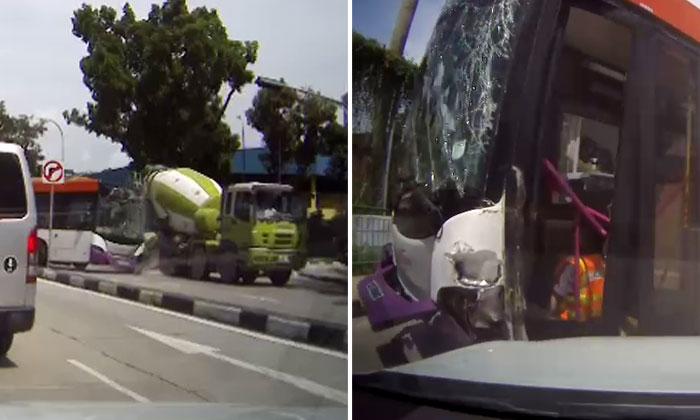 A bus driver and two passengers were taken to hospital after an accident involving a cement mixer truck and van at the junction of Aljunied Road and Mattar Road on June 4.

Several Stompers alerted Stomp to a video of the incident showing the moment of impact.

In the footage, the bus is seen making a right turn when it is hit on its left by a cement truck.

The impact causes the bus to swerve and cross the road divider before hitting a stationary van and coming to a stop.

The front windscreen of the bus is shattered and a man wearing a high-visibility vest, believed to be the driver, is seen on the floor of the bus next to the front door.

In response to a Stomp query, Ms Tammy Tan, the operator's senior vice-president of corporate communication said: "On Friday afternoon, our bus was making a right turn with the green light in its favour when it was hit on the left by a cement mixer.

"The impact caused the bus to swerve to its right, mount the divider kerb and hit a stationary van before coming to a stop.

"Our Bus Captain, who was conveyed to hospital for treatment, was kept under observation overnight and discharged the following day.

"He is on hospitalisation leave for a week and we are rendering support to him.

"We are also in touch with a passenger who has been discharged and are providing assistance to her.

"Meanwhile, we continue to try to get in touch with the other passenger who was also conveyed to hospital.

"We are assisting the Police in its investigations."

In response to a Stomp query, the police said they were alerted to the accident at 2.17pm.

"The 54-year-old male bus driver and his two passengers, aged 45 and 64, were conscious when conveyed to the hospital," a police spokesman said.