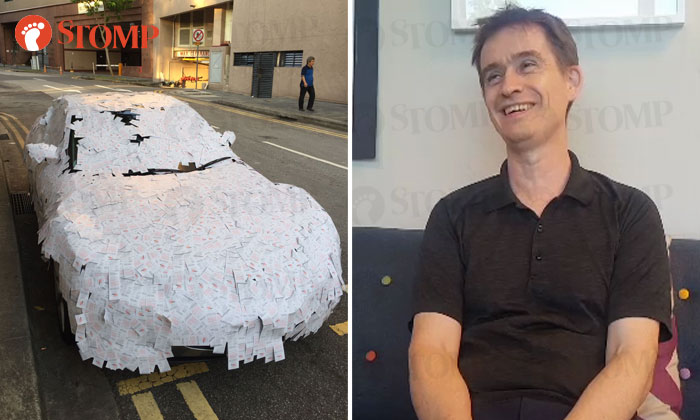 It was only last week when nearly half a million motorists were pranked when they saw a tiny slip of white paper tucked under their window wipers.

However, it turned out to be part of a large-scale marketing campaign called 'Operation National Summons' by Budget Direct Insurance.

Stomp received photos today (Jun 30) from Stomper Thann who was on his way to work when he saw someone's car completely covered with these 'saman' slips stating the transgression: Paying too much for car insurance.

"On closer inspection, it looks like the recent parking tickets by Budget Direct Insurance. Well done!!" exclaimed the Stomper.

Stomp discovered that the car actually belongs to the insurance company's CEO Simon Birch and no, it was not a revenge prank.

His employees used the slips that they had collected and picked up from their 'Operation National Summons' campaign to carry out their feat.

"They got me good and proper," joked Simon.

Simon also spoke to Stomp about the public reaction to their islandwide prank which many lauded as creative and effective, but there were those who simply did not find it funny and took to social media to rage about it.

"I hope most people enjoyed the joke and I do understand that there were some people who didn't and to them, I apologise. I did not mean to cause anybody any offence," he said.

However, the company has more creative initiatives up their sleeves so love it or hate it, we hope it grabs our attention as much as this one did.