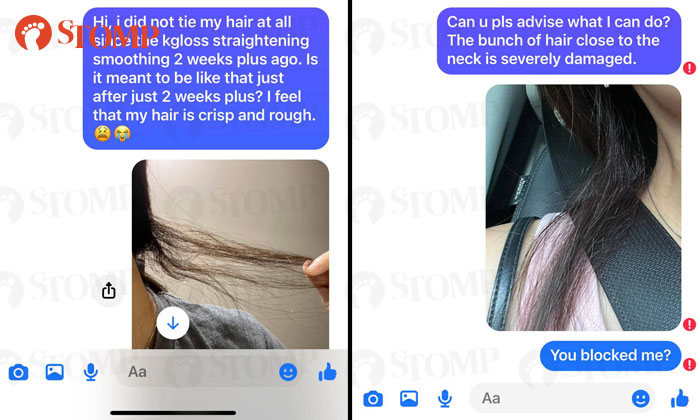 A woman was distraught when her hair became extremely dry and damaged after getting a hair treatment done at a salon.

The Stomper shared with Stomp she booked an appointment at Hairtag Studio in Kallang after seeing advertisements on Facebook.

"I saw the amazing results of past customers so I went for a K-Gloss smoothing straightening treatment on Oct 8," she said.

"The part near my neck was still frizzy so I messaged the salon via Facebook and returned on Oct 12 to have it redone.

"Merely a few weeks later, the part near by neck actually got really crispy, wavy and dry so I messaged them again to seek help.

"Who knows why they blocked me!

"I will just have to bear with the hair until it grows out of this condition.

"I'm not sure if other customers have had the same encounter but I just wish to alert the public on this salon's unprofessionalism."