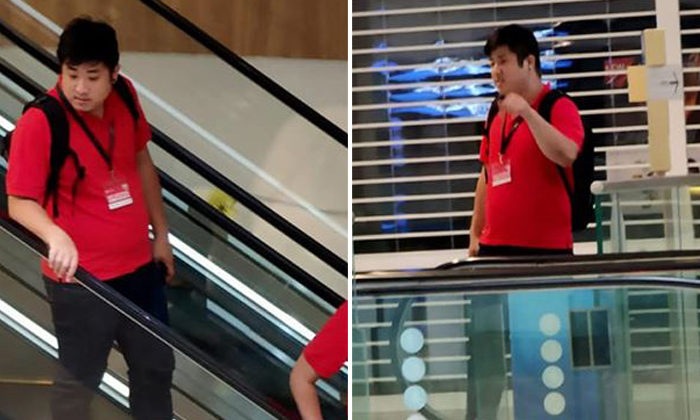 A safe distancing ambassador was fined $300 for not wearing a mask while he was conducting surveillance checks at a shopping mall, after photos of him failing to wear the mask were shared on social media.

In response to media queries, Enterprise Singapore (ESG) said on Saturday (April 18) that it had deployed the safe distancing ambassador to conduct surveillance checks at shopping malls.

Based on its investigations, the man had gone to the restroom during his break and forgot to put his mask on after leaving it, which was when the photos were taken.

The images of the safe distancing ambassador not wearing his mask were taken at White Sands shopping mall on Wednesday and posted by Facebook user Daniel Wong.

The man is seen talking to another safe distancing ambassador, who is wearing a mask, and riding on an escalator with him. The Facebook post with the photos, which was uploaded on Thursday, has been shared about 850 times as of early Saturday afternoon.

ESG said that the man put on his mask immediately after other safe distancing ambassadors reminded him to do so.

It added that it takes a serious view of such infringements and has issued a stern warning to the man, in addition to the $300 fine.

"This is consistent with the penalty imposed on individuals who are found not wearing a mask in public, as we expect our safe distancing ambassadors to uphold the same standards," it said, adding that the man has accepted the penalty and apologised for his mistake.

ESG said it has reminded all safe distancing ambassadors about the requirement to wear masks at all times when they are not at home.

Related Stories
FB post about GrabFood rider 'fined $300 for wearing cloth as mask' is fake, he was asking police for help over theft
Auntie accuses enforcement officer of bullying and forcing her to wear mask: 'It's my problem if I die'
Auntie fined $300 after insisting on eating kway chup at hawker centre: 'Orh gong then orh gong, I'm not scared!'
More About:
Covid-19