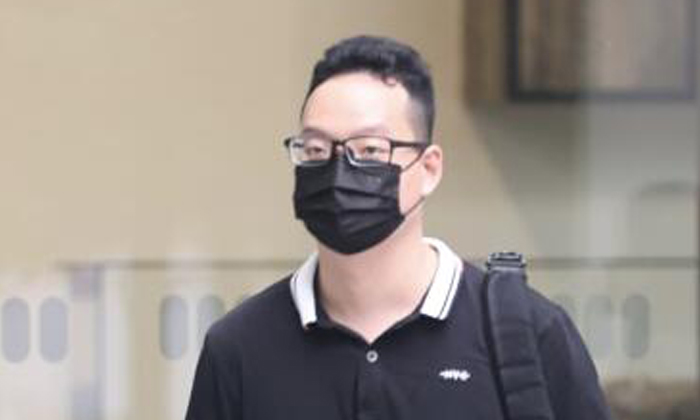 A Singapore Armed Forces (SAF) regular stalked schoolgirls in uniforms and recorded at least 28 upskirt videos between September and October 2020.

On Tuesday (July 12), Poh Yu Jian, 30, pleaded guilty to committing voyeurism and was jailed for 20 weeks.

He filmed at least 13 girls and would catch them at locations such as overhead bridges near schools, where he recorded the victims at the foot of the stairs.

The videos were about one minute long each, but the longest one was five minutes in duration, which was taken as he stalked a girl in Buona Vista MRT station.

He was caught red-handed by a 15-year-old girl who saw him filming her on an escalator at an MRT station.

The court heard that Poh has been suspended from his duties in the SAF as a military medical expert and is likely to face termination following his court case.

Deputy Public Prosecutor Etsuko Lim told the court that Poh recorded no fewer than 28 upskirt videos of at least 13 girls without their consent on at least 13 separate occasions.

He filmed them in the hope of seeing their private parts, said the DPP.

The offences took place at MRT stations, along overhead bridges or on double-decker buses and Poh targeted girls in school uniform.

Each time, he would tail them closely and hold his phone - a Samsung Galaxy Note 20 - at his waist level and take a video, with his camera pointing upwards.

He stalked her and filmed an upskirt video of her by standing behind her on an escalator that was travelling upwards.

The girl felt someone brush the back of her knee while she was on the escalator and saw that the accused was recording an upskirt video of her.

She reported the matter to her teacher, who called the police.

Poh was arrested on Oct 17.

Each of the 28 videos recorded by Poh captured the victim's shorts or thighs and all of the victims were in school uniform.

The DPP added that three of the 13 or more victims were identified and that two of them were 14 and 15 years old at the time. The age of the third victim was not mentioned in court documents.

Poh had also installed an application on his phone to save screenshots and shorter clips of each upskirt video for ease of viewing.

The DPP said: "He concealed his (offences) by storing all the upskirt videos, as well as multiple obscene films, in a secure password-protected folder on his phone."

Urging District Judge Jasvender Kaur to sentence Poh to 20 to 22 weeks in jail, DPP Lim said: "There is a strong public interest in ensuring that millions of commuters can travel safely each day, without having to suffer the indignity of having their privacy invaded."

The DPP added that Poh was persistent in recording each of his victims, who were all relatively young.

Seeking a 16-week jail term for Poh, defence lawyer Gloria James said the accused had worked under immense stress during the time of the offences, balancing his duties with his schoolwork as a part-time university student.

Poh turned to a Telegram group, in which members shared sexual content, to fill the void created by social isolation as Covid-19 measures tightened, said his lawyer.

If he is found to have breached his contract with the SAF, Poh may have to fork out $87,000 as a penalty for breaking his bond, she added.

Judge Kaur said that she agreed with the prosecution that there were aggravating factors in Poh's case, while noting his early plea of guilt and steps to seek psychiatric treatment.

A spokesman for the Ministry of Defence (Mindef) said on Tuesday: “Military Expert 2 Poh had earlier been suspended from all duties in the SAF.

“With his conviction in court, Mindef and the SAF will further review his case and take appropriate action against him, which may include discharging him from regular service.”

Poh could have been jailed for up to two years, with caning and a fine.

Related Stories
SMU student admits to taking 19 upskirt videos of women in under 4 months
Chinese national took upskirt photos of 400 women while working in NTU
Fresh graduate has taken so many upskirt videos that he can't recall number of victims
More About:
Voyeurism
upskirt
pervert
court