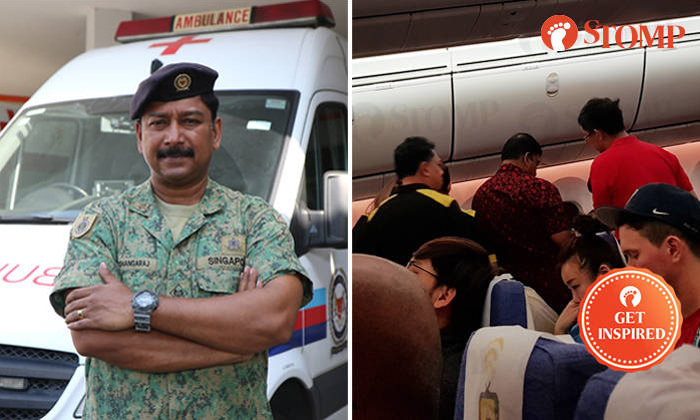 Tension was high when a young boy suffered from breathing difficulties during a Scoot flight, around 45 minutes before it was scheduled to land at Changi Airport.

However, a paramedic from the Singapore Armed Forces (SAF) was swift to act when cabin crew requested for medical assistance on board, attending to the distressed child and putting other passengers at ease.

Stomper R, who declined to be named, was on board Flight TR869 from Bangkok to Singapore on March 31 when the incident occurred at around 7.20pm.

She said: "About 45 minutes before we could land in Changi Airport, the Captain announced for any medical personnel on board the flight to attend to an emergency case."

According to R, a child was experiencing breathing problems.

She told Stomp: "It was then I noticed a man who attended to this case.

"He introduced himself as Raj, an SAF paramedic.

"He was forthcoming and rendered assistance to the distressed passenger. He also stayed all the way with the passenger until the medical team from Changi Airport took over the case when the plane reached Singapore."

Other than speaking to the boy's parents and obtaining his medical history, Raj also stayed with the boy to monitor his vital signs until the plane landed.

In response to a Stomp query, a spokesman for Scoot confirmed the incident and said: "A paramedic and a doctor responded to cabin crew’s call for medical assistance on board.

"It was assessed that the guest would require medical attention on arrival. The guest was subsequently met by medical professionals at Changi Airport and sent to a hospital.

The sharp-witted paramedic has been identified as Military Expert 3 (ME3) Thangaraj R. Krishnasamy.

Besides being the Senior Medic heading Maju Camp Medical Centre, the 50-year-old is also a Cluster Sergeant Major at the Military Medicine Institute.

Asked about what spurred his actions on board the flight, Raj told Stomp: "When called upon to help, I felt confident that I would be able to provide the medical assistance as I am a trained paramedic.

"I am glad to have been able to assist the child who was feeling unwell and at the same time reassure the parents and other passengers on board."

Having served in the SAF for 34 years, Raj's expertise include training other medics, running medical centres, as well as managing medical posts during large-scale events such as the National Day Parade and Army Half Marathon.

Neither is he a stranger to responding to emergencies.

"I was also part of the SAF medical team that was deployed to provide medical assistance during the Hotel New World Disaster," he said.

"The experience I gathered made it second nature to answer to calls for medical assistance wherever I am."

Raj, who lives by the SAF Medical Corps' motto of Seek, Save and Serve, added: "This maxim is imbued in me and is a constant reminder to seek excellence, save lives and serve the SAF."

"My advice to anyone who is medically trained is never to be afraid to render assistance when called upon to help.

"It is a privilege to be able to provide medical care to another person, who is undoubtedly someone’s loved one."

The incident on Flight TR869 left a deep impression on Stomper R, who personally reached out to Stomp to commend Raj's actions.

R said: "I believe such people should be highlighted.

"Thanks to the SAF for training such paramedics, and thanks to Mr Raj who was very forthcoming and willing to help."