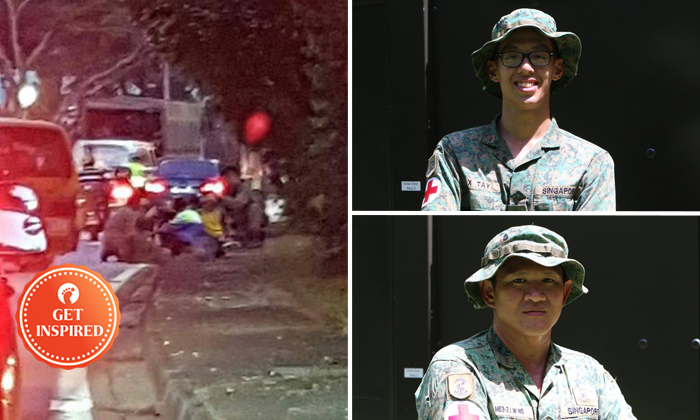 A group of medics from the Singapore Armed Forces (SAF) stopped to render their assistance to victims of a traffic accident in Mandai yesterday (April 25).

A school van that carried four students and its driver had reportedly crashed into a lamp post along Mandai Avenue at around 6.40am.

Three casualties were in a conscious state when taken to KK Women's and Children's Hospital (KKH), while another two victims were conscious when sent to Khoo Teck Puat Hospital, said the Singapore Civil Defence Force (SCDF).

According to a Facebook post by The Singapore Army, servicemen from the Combat Medic Specialist Course of the SAF Medical Training Institute (SMTI) had been on their way to an outfield exercise when they came across the accident.

ME3 Ng Jaan Woei, officer commanding and emergency medical technician specialist at SMTI, "halted the convoy of SAF vehicles after seeing the four children crying and the driver at the side of the road at the accident scene," said the army in its post.

He also aided a boy who had sustained a bad cut on his forehead and cuts on his legs due to the shattered glass from the school van.

3SG Tay Yong Xi Delwin, an emergency medical technician specialist at SMTI, assisted another boy who had a cut on his forehead and on his left elbow.

In addition, ME2 Muhammad Zulhilmi led several others in removing the fallen lamp post to ease traffic congestion and allow the ambulances to reach the accident site in the shortest time possible.

"The injured were subsequently handed over to SCDF ambulance paramedics before our servicemen proceeded with their journey," added the post.

Wishing the accident victims a speedy recovery, the army also commended its servicemen for "being ready to step forward".