SAF commander who allegedly scolded passer-by for asking him to wear mask to be disciplined: MINDEF 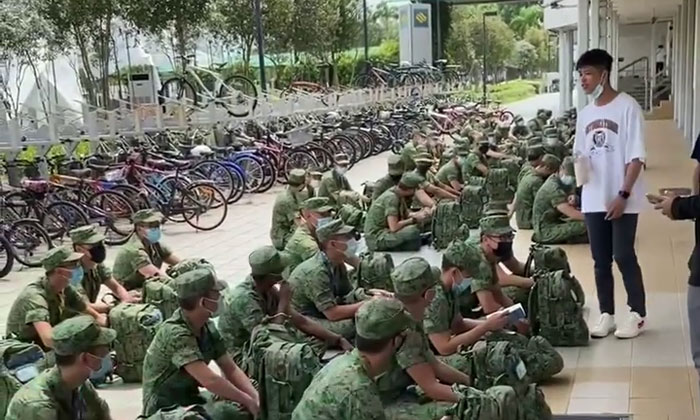 A Singapore Armed Forces (SAF) commander will be disciplined after he was caught on video not wearing his mask while addressing Basic Military Training (BMT) recruits near Pasir Ris MRT Station on Monday (July 26).

The incident came to light after Facebook user Ivan Ho shared videos and photos of the commander on the social media platform.

According to Ivan, he noticed the commander with no mask and holding a drink in one hand.

"He spent about half an hour talking without a mask on," Ivan said.

"I know [because] that's how long I was being stood up by my friend."

He then decided to approach another man to ask the commander to mask up and not "be a bad example to the younger ones".

"Upon hearing this, he walked over and retorted back, 'WHO [ARE YOU]'.

"As I was about to leave seeing to avoid further confrontation, he left an expletive to me that contains language that mentioned my mum.

"Really a disgrace to the soldiers he is training."

In response to a media query, the Ministry of Defence (MINDEF) issued a statement:

"The SAF has completed investigations of the SAF commander who did not comply with Safe Management Measures (SMMs) while addressing BMT recruits near Pasir Ris MRT station on 26 July.

"The commander was found to have breached SMMs and will be disciplinarily dealt with.

"SMMs are critical to ensure the safe conduct of the SAF’s training and operations, and our commanders are expected to set a positive example as well as enforce those rules to protect themselves and their trainees."