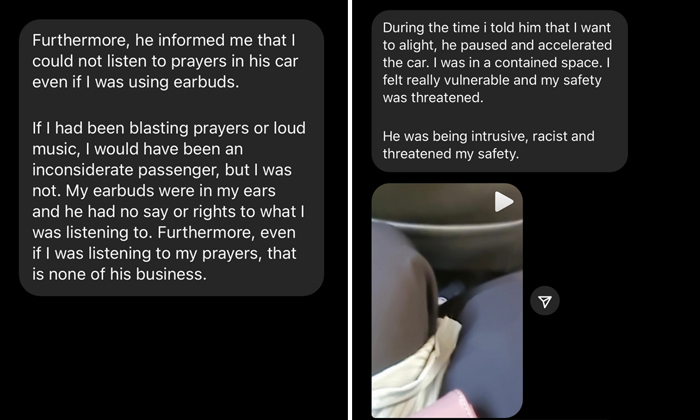 Ride-hailing firm Ryde has suspended a driver who told a passenger not to listen to prayers in his car — even though she had not been doing so.

A video of the Muslim woman's conversation with the Ryde driver was posted online by the Wake Up, Singapore Facebook page on Friday (Dec 3).

The page also shared the woman's account of the incident, which she described as a "very traumatic experience".

In the video, the driver can be heard telling the woman not to listen to prayers because "the environment, the energy all change".

The woman expressed discomfort and asked to alight from the car, to which the driver responded: "The commission, you have to pay, you know?"

According to the woman, she had not been listening to prayers. She also said that it was her own business even if she had been doing so.

She is heard telling the driver: "You are telling me that if I listen to my own, whatever I want to listen to using my earplug, is wrong?"

"Thank you for being very racist," she added before alighting from the car.

The woman said that the incident left her shaken up and deeply traumatised.

She recounted: "I felt as if I was being controlled and he has the privilege to control me just because I was in his car."

The woman also emphasised that her intention was not to shame the driver and hopes that other minorities would not "suffer the same fate".

Wake Up, Singapore subsequently posted screenshots of Ryde's statement, in which the company said that it has suspended the driver.

Ryde said it was aware of the incident and had seen the video "circulating around".

It added: "We would like to first and foremost, apologise to the rider who experienced this.

"Ryde is a company that champions the diversity, inclusivity and the importance of creating a safe and healthy community.

"We absolutely do not condone such behaviour and would like to reassure the rider, the public, and all hurt by the event, that we have suspended the driver."

Ryde also apologised for the delay in its response and said it is "yet another point we will work on improving as well."