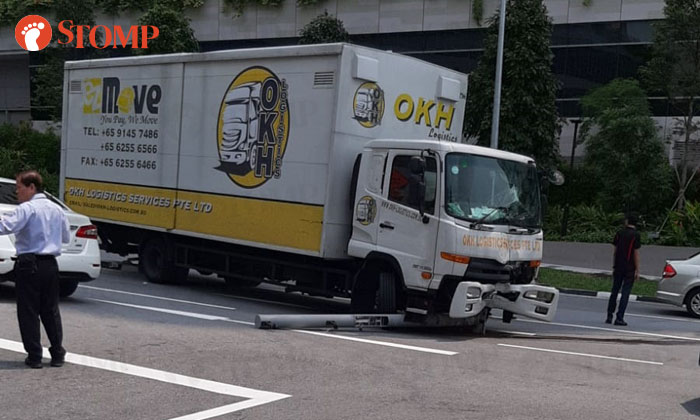 A lorry knocked over a traffic light after it rolled down a slope near Tan Tock Seng Hospital on Monday morning (Sep 9).

Stomper Maniam alerted Stomp to the incident and shared photos and a video he took at the scene.

He was waiting outside the Centre for Geriatric Medicine when he said he heard a loud bang followed by a screeching sound.

"I saw the runaway lorry coming down the slope slowly and a screeching sound as it did so.

"I then saw that it had run over a traffic light which was trapped underneath the vehicle.

"When I walked closer to see what happened, I saw these group of guys running after the lorry.

"There was nobody in the driver's seat.

"One of the guy's managed to open the door and looked like he pulled the handbrake.

"Thank God no one was there and got injured because of this."

In response to a Stomp query, the police said they were alerted to an accident along Jalan Tan Tock Seng towards Moulmein Road at about 11.19am.