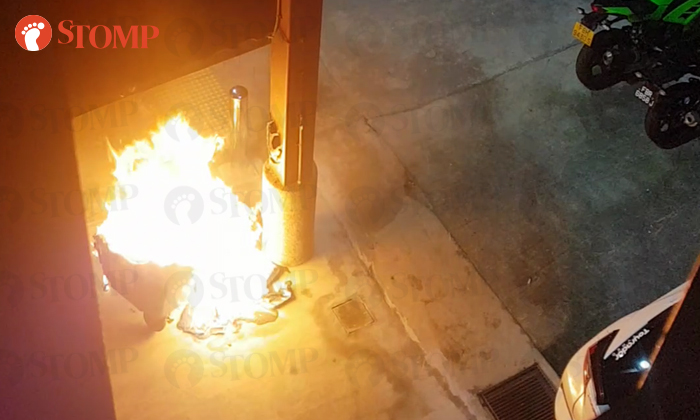 A resident in Bukit Batok received a rude shock when she woke up to heat and fumes after a rubbish bin on the ground floor caught fire in the wee hours of Thursday (Nov 12).

The Singapore Civil Defence Force (SCDF) told Stomp that it was alerted to a fire at Block 339 Bukit Batok Street 34 at around 3am.

A member of public extinguished the fire using buckets of water prior to the SCDF's arrival," said a spokesman.

Stomper Cherry, who took a video of the incident, shared how she was awakened by the blaze.

Cherry said: "It all happened so suddenly and quickly.

"I woke up to use the washroom and was trying to go back to sleep when I noticed red flames being reflected on my room window.

"We got up from bed and took a peek down our window which was slightly open, and was shocked to see the recycle bin on fire.

"We could feel the heat rising with the strong burning smell of smoke, and had to fully shut my windows.

"Moments later, a burnt smoke smell filled our room. We went over to our kitchen and opened the window to get a clearer view and noticed the whole bin was in flames.

"We immediately called 995 and took a short video of the fire.

"Looking around, we noticed that everyone else's lights were off as they were sleeping."

According to Cherry, an alert member of the public ran to get help from a group of guys who were attending a funeral wake at the opposite block.

She told Stomp: "These guys were so quick to put out the fire with bottles of water.

"The water was meant for guests who attended the wake but without much time to waste, they used up the whole carton of bottled water to help stop and put out the fire.

"I must say they were heroes. Thanks for being so helpful and big-hearted."

Cherry said that the authorities subsequently arrived, adding: "The burned bin was removed but the aftermath left a melted plastic mould at the scene."