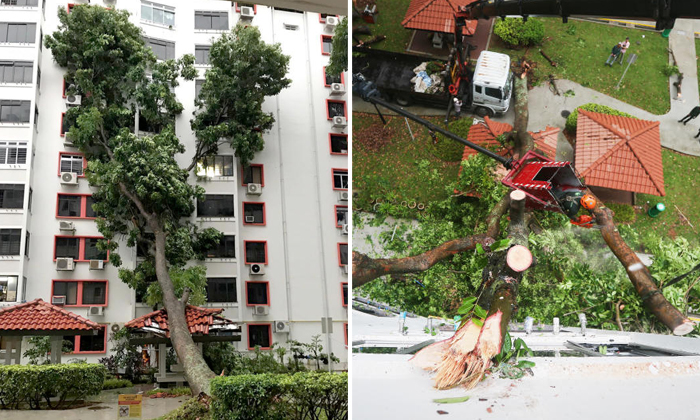 An eight-storey-high tree in the Old Airport Road area toppled onto a Housing Board block in the early hours of Wednesday (April 3), shattering the windows of at least four flats.

The tree, near Block 97 Jalan Dua, fell at around 5am amid a heavy downpour and strong winds across the island.

About 20 units up to the eighth storey were affected and a pavilion at the foot of the block also had its roof crushed.

In response to queries, a spokesman for the Marine Parade Town Council said that there were no reported injuries.

The spokesman added that its horticulture contractor was activated to the scene immediately.

The contractor has since removed the tree and cleared the debris.

"We are currently liaising with the affected residents and assisting them to repair the damage," the spokesman said.

A 64-year-old resident told Chinese-language newspaper Lianhe Wanbao on Wednesday that she heard a loud boom from the window at about 5am.

Ms Zeng Yuhua, who lives on the ground floor, said: "I thought it was an accident and did not think too much of it. I woke up at about 8am and realised that a tree had fallen.

"I wanted to check the situation outside. That was when I realised that my back door was blocked by fallen tree branches."

Another resident, who lives on the fifth storey, said that his kitchen windows were shattered. His kitchen cabinet was also not spared by the fallen branches.

The 52-year-old warehouse manager said: "I heard the sound of glass shattering in the morning. When I got up to check what had happened, I was shocked by the scene in the kitchen.

"My kitchen cabinet had dropped to the ground, and the glass bowls inside it broke too, with the pieces scattered all over the floor."

He added that the damage is expected to cost him around $2,000.

He wrote: "Oops. The wind was really strong yesterday. Tree was uprooted and crashed onto some flats."

He said he visited some of the residents on Wednesday morning and also asked the town council to help them with the repairs.