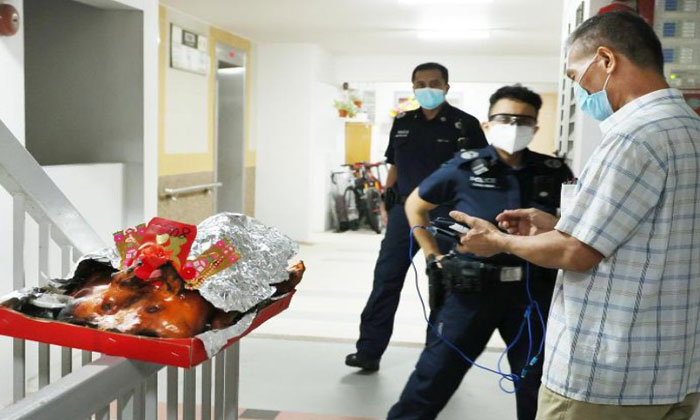 The police were called in after a roasted meat seller was allegedly pranked into delivering a roast pig to a Malay family in Tampines on Tuesday evening (Nov 16).

Mr Aw Say Meng, owner of Ming Wang Roasted Pig Supplier, shared with Shin Min Daily News that he received an order on Monday for a $188 roast pig to be delivered to a flat at Tampines Street 81 the next day.

The mobile number used to place the order reportedly belongs to a "financial services" business.

Mr Aw said he asked the customer to pay him via PayNow but the customer refused and insisted on paying cash on delivery.

The so-called customer even told him he could call the police if he did not receive payment.

When Mr Aw arrived at the address with the roast pig, no one answered the door.

He called the number used to make the order several times but his calls went unanswered.

He ended up waiting four hours before being told to collect the money from a maid living in the flat with an elderly Malay widower.

It is unclear whether she is a debtor.

The police said they received a report of harassment and are investigating the incident.

Mr Aw said in the seven years he has been running his business, this is the first time he has been pranked.

"This is my hard-earned money, how could they do this to me?"