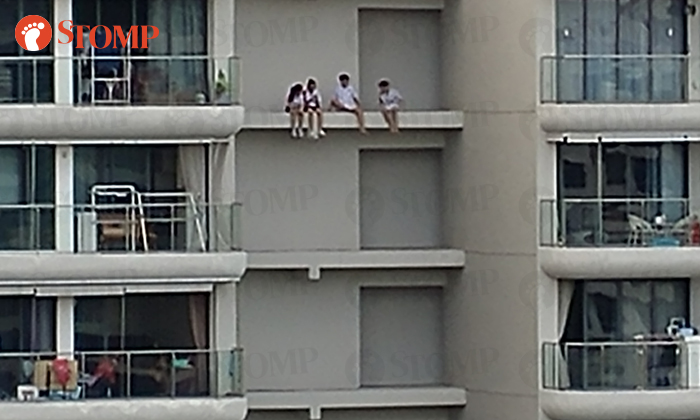 The management of Riversound Residence has responded to a Stomp query about a video that showed five students sitting on the ledge of the condominium building.

Stomper W witnessed the incident on Aug 21 at around 4.49pm, at Block 9, and contributed a video to Stomp.

He expressed concern over their behaviour and said he hoped to raise awareness about what he saw so that parents could better educate their children.

The Condominium Manager of Riversound Residence has since issued an official statement regarding the incident.

"Upon notification of the event, we tracked down the unit shortly and the parent of one of the students was made aware of the incident. The remaining students are his friends.

"The ledge is part of the bomb shelter’s mandatory reinforcement structure and all safety requirements are met as confirmed by our architect.

"It is unfortunate that the students have, for unknown reasons, breached the safety barrier by climbing onto the ledge. They are probably young and unaware of the danger and consequences.

"Following this, we have also issued Advisory Notices to all our residents to promote better safety awareness.

"The Management Committee has been informed about the incident."