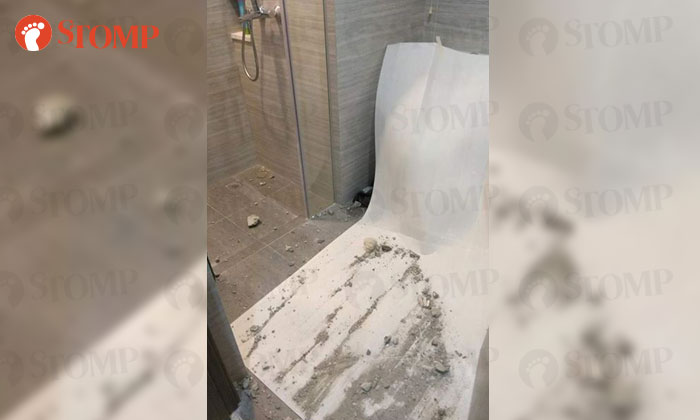 Stomper Justin is disappointed that barely one month after moving into his brand new apartment at Riverbank @ Fernvale, things are already falling apart.

Justin and his family moved into their new home at the condominium in July but before National Day, they discovered that water was leaking through a fake ceiling in their bathroom.

"We came back home and when one of my children switched on the light to the bathroom, it caused the whole house's electricity to trip," said Justin.

We brought this to the attention of the security guard who gave them the contact number of the contractor for the property.

"They came last Friday to saw open the ceiling to investigate what went wrong, then told us they would contact us on Monday (Aug 21) to continue the repair."

However, Monday came and went and they heard no word from the company.

Already disappointed at what had happened, Justin was shocked when debris started 'raining' from the hole left in the bathroom's ceiling.

"I WhatsApped the contractor but I didn't get a reply," said Justin.

He added that he also tried contacting the developer but has been unsuccessful in getting a response from them.

"I'm just very disappointed that our brand new home has so many problems.

Justin wanted to share his experience with more people so that someone might be able to relieve his plight.