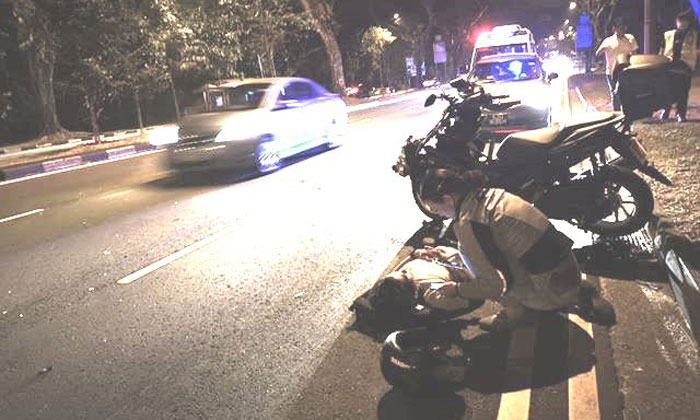 A 25-year-old motorcyclist was taken to hospital after he collided with a deer along Upper Thomson Road towards Thomson Road on Saturday evening (Sep 21).

In a photo posted on ROADS.sg's Facebook page, a woman is seen bending over the rider who is lying on the road.

In response to a Stomp query, the police said they were alerted to an accident involving a motorcycle and a deer at about 9.23pm.

The motorcyclist, a 25-year-old man, was conscious when taken to Khoo Teck Puat Hospital, a police spokesman said.

Stomp understands that the deer got up and retreated back into the forest after the accident.

In December 2018, a wild sambar deer died after it was hit by a motorcycle along Mandai Road. The rider suffered multiple abrasions but refused to be taken to hospital.

Another deer was put down due to severe injuries after it was involved in a three-vehicle accident on the Bukit Timah Expressway in June, 2018.

Also known as sambaur deer, they eat leaves, fruits and bugs. Males can grow up to 2m tall including antlers, and weigh up to 260kg, while females are two-thirds the size of males or smaller.

They can live up to 20 years in the wild.