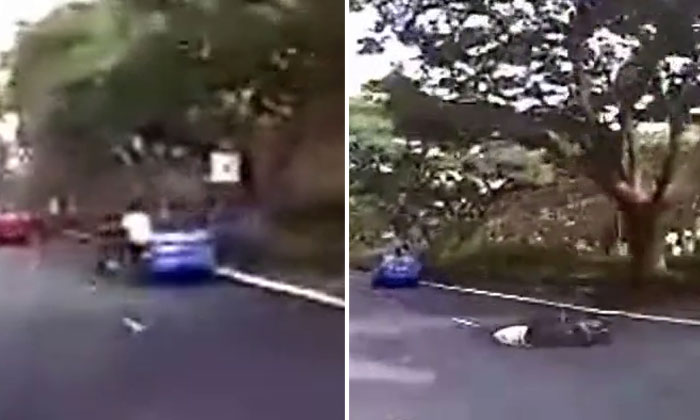 A 29-year-old rider was taken to hospital after he was involved in an accident with a taxi along the East Coast Parkway (ECP) towards Changi Airport on Thursday afternoon (Jan 3).

A Stomper shared a video of the accident that he had received via WhatsApp.

In the video, the rider can be seen travelling in the middle lane while the taxi is in the rightmost one.

The rider is then seen drifting to the right and clipping the left side of the taxi, causing him to fall off his bike and roll onto the road.

The video then ends but according to the post's caption, the man was allegedly run over by another vehicle while lying on the road.

In response to a Stomp media query, a police spokesman said they were alerted to the accident at about 4.25pm.

"The motorcyclist, a 29-year-old man, was unconscious when conveyed to Changi General Hospital," the spokesman said.

Stomp understands that the man is a Singaporean.

Related Stories
Driver taken to hospital after being rescued from toppled trailer at West Coast Highway
2 lorries and 1 taxi in accident along PIE
Driver causes Stomper to fall off bike after making sudden brake in Tampines, police investigating
More About:
accident
motorcyclist
taxi