Rider taken to hospital after accident with car at Finlayson Green 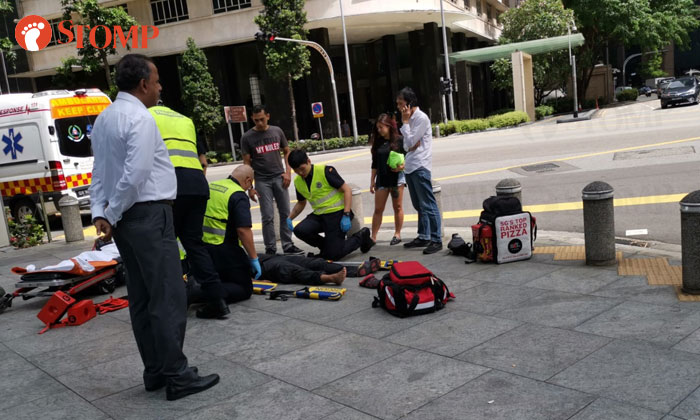 A 28-year-old motorcyclist was taken to hospital after he was involved in an accident with a car along Finlayson Green towards Marina Boulevard on Friday morning (June 21).

Stomper Roger alerted Stomp to the incident and shared photos he took at the scene.

"I was at One Raffles Quay's North Tower lobby when I heard a loud crash sound," he said.

"It was a road traffic accident involving a motorbike and a Toyota saloon car."

In the photos, the rider is surrounded by paramedics and passers-by and an Alt. Pizza delivery bag is seen nearby.

The rider's bike is lying in the middle of the junction.

In response to a Stomp media query, the police said they were alerted to the accident at about 11.22am.

The motorcyclist, a 28-year-old man, was conscious when taken to Singapore General Hospital, a police spokesman said.