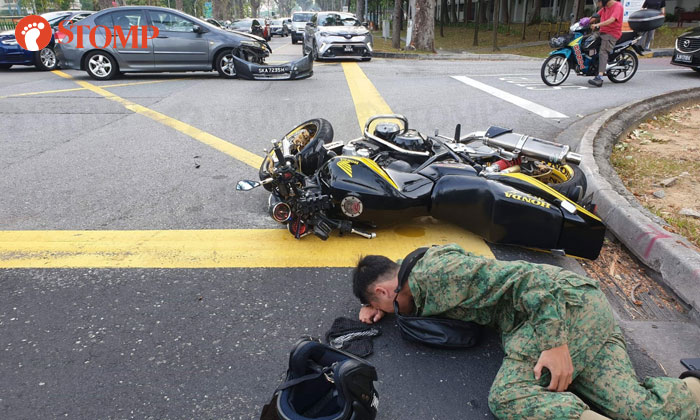 A 20-year-old man was taken to hospital after he was involved in an accident with a car at the junction of Upper Serangoon Road and Hougang Street 31 on Tuesday morning (Mar 19).

Stomper Adolfo alerted Stomp to the incident after witnessing what had happened.

According to the Stomper, the car hit the motorcyclist as the driver was making a right turn.

The impact of the collision caused the car's bumper to fall onto the road.

In a photo shared by Adolfo, the motorcyclist, who is wearing an army uniform, is seen lying on the road and clutching his left leg in pain.

"I assisted and informed the crowd not to touch the biker and to let him move and stand up on his own," said the Stomper.

"I then called 995 and left when an ambulance arrived."

In response to a Stomp media query, the police said it was alerted to the accident at about 8.04am.

The motorcyclist, a 20-year-old man, was conscious when taken to Sengkang General Hospital, a spokesman said.

"There have been so many accidents involving right-turns lately," said Adolfo.

"I'm sharing this to spread awareness.

"Bikers and drivers must really improve their situational awareness on the road."